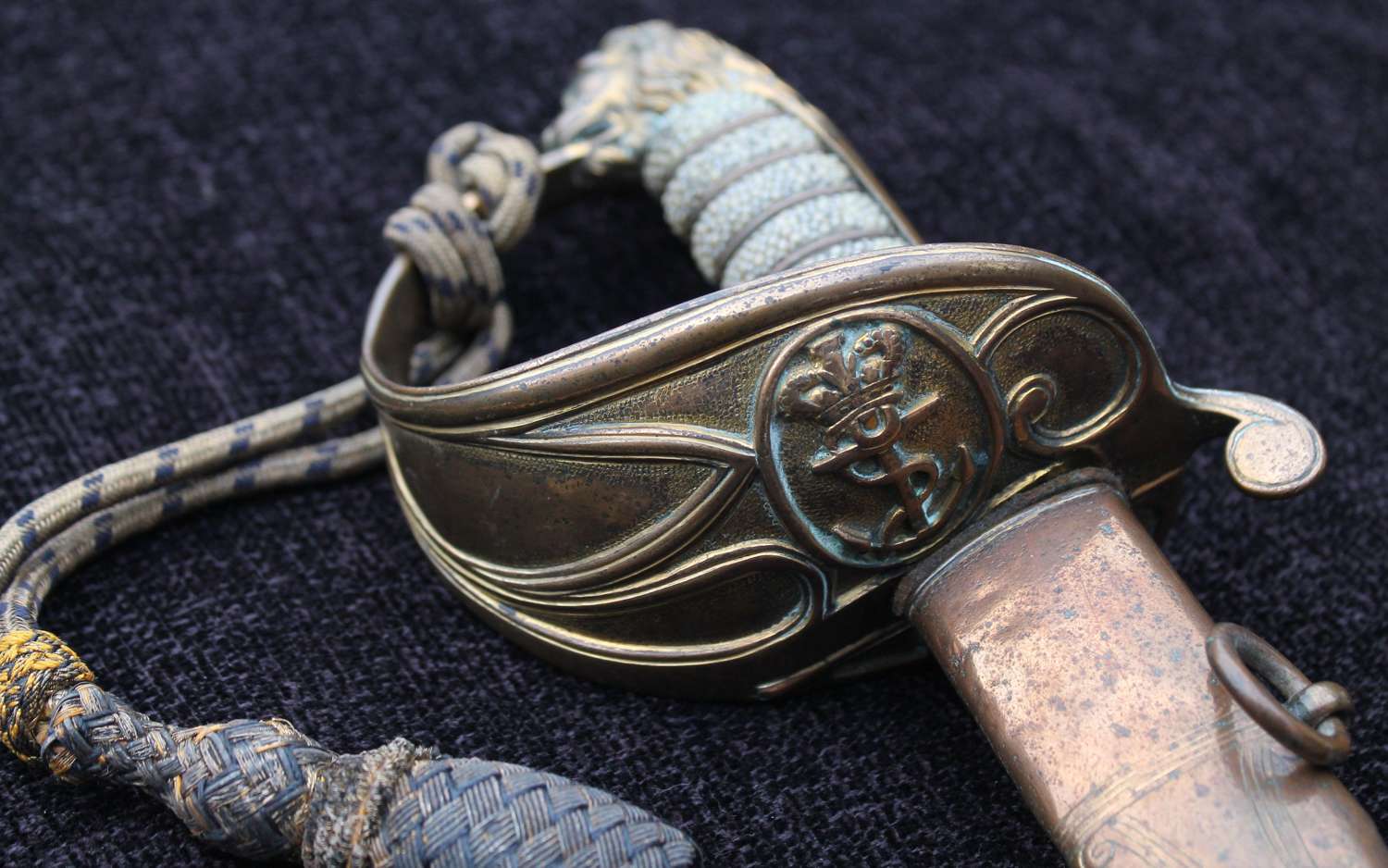 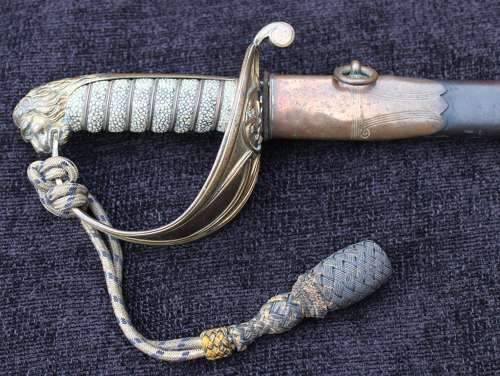 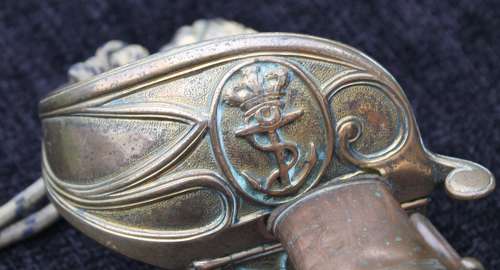 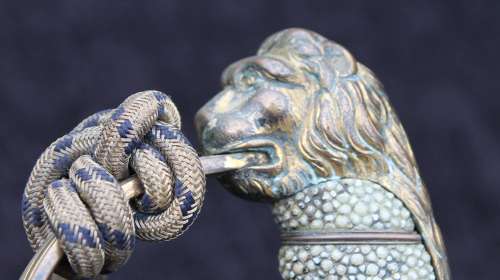 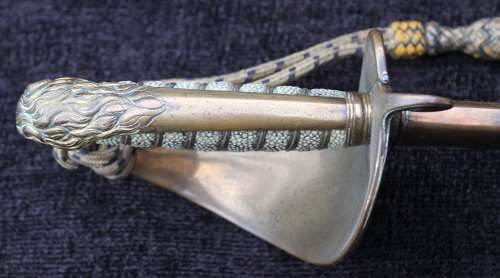 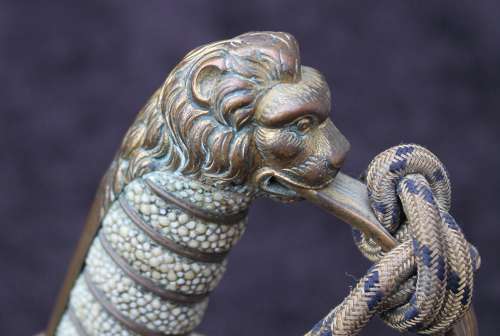 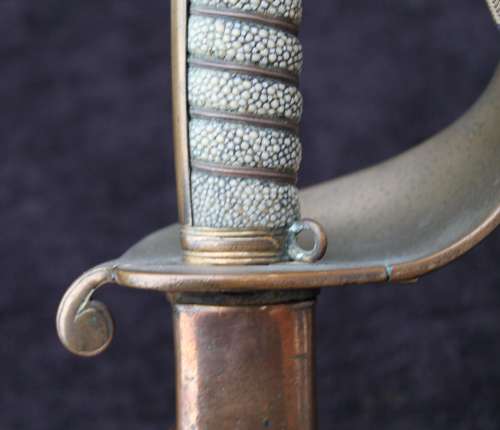 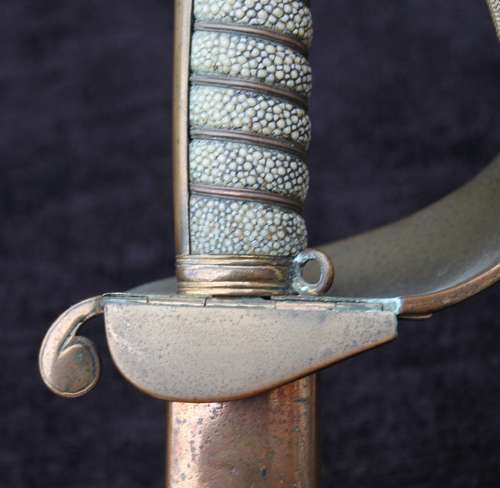 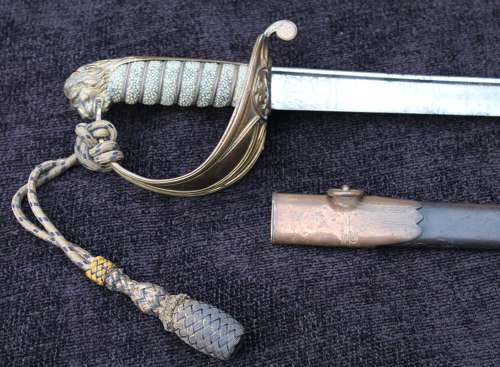 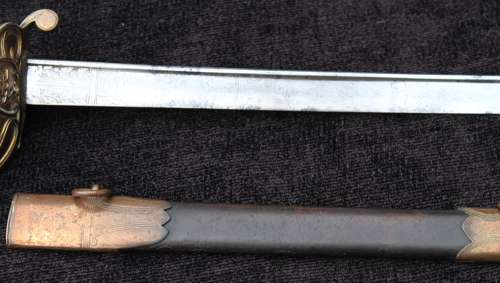 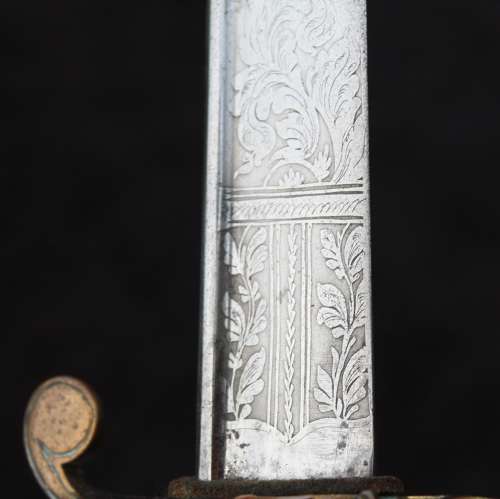 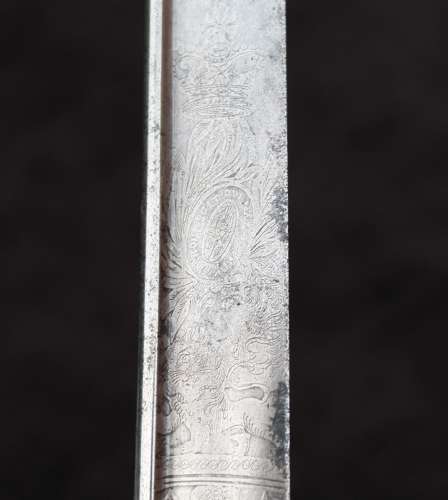 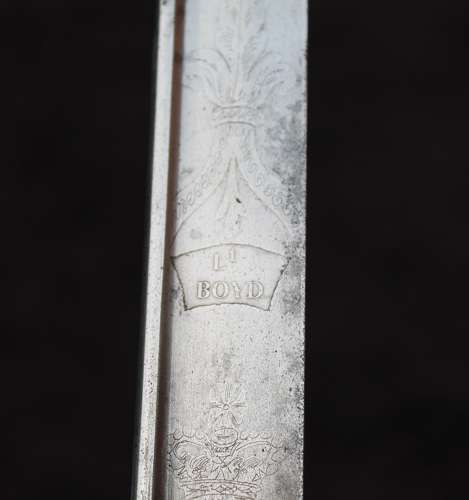 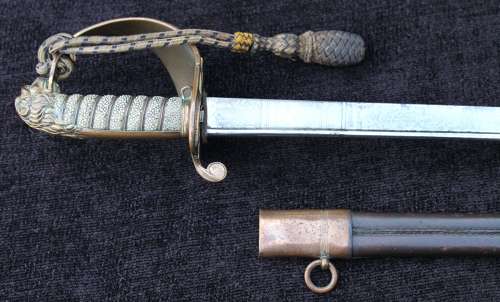 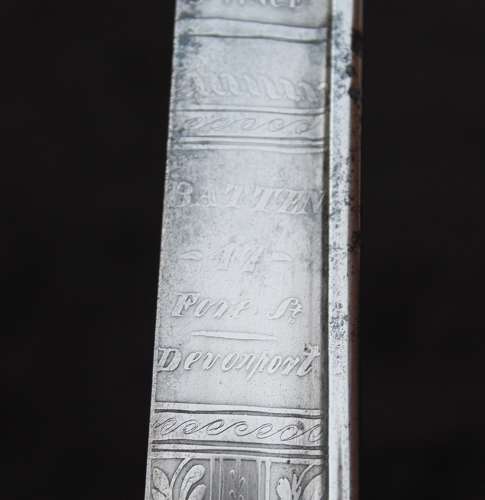 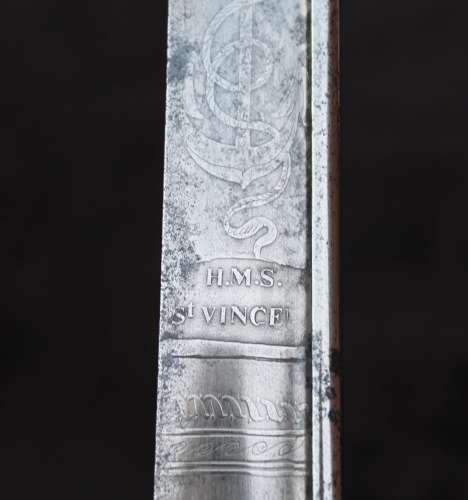 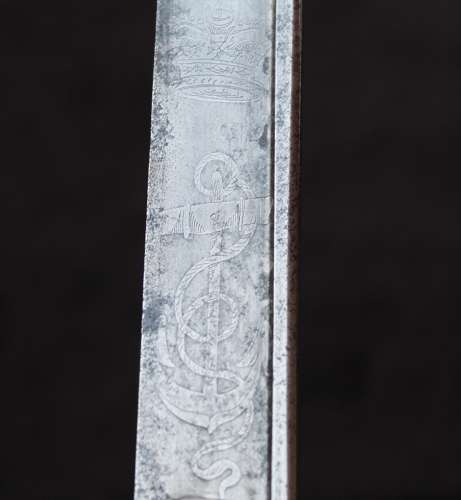 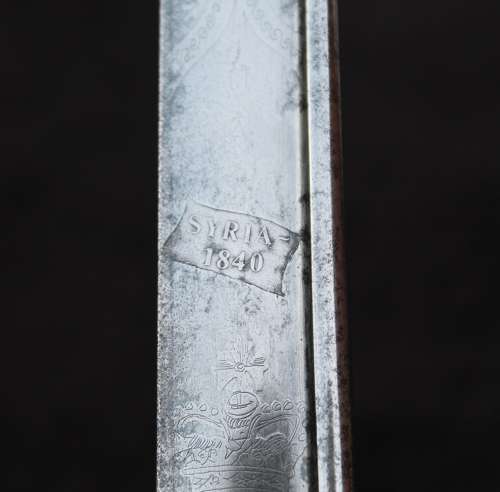 It isn't often I have the privilege to offer for sale a sword to a genuine Victorian hero, a man who rose through the ranks of the Royal Navy, fought for his country, and gave his life trying to save others. He bravery was feted across the United Kingdom, He was posthumously awarded the RNLI Silver Medal, the Tayleur Gold Medal and the Sea Gallantry Medal. He had poetry written about him, a statue erected in St Patricks Cathedral, paid for by the people of Dublin. He is commemorated with various memorials across the UK. Fascinated? Then read on...

John McNeill Boyd was born in Derry in 1812. native who joined the Royal Navy in 1825, aged thirteen as a midshipman.

He served on H.M.S. ARIADNE under the renowned author Captain Marryat who devised the Marryat Code of Signal Flags.  He was appointed Lieutenant in 1841 serving aboard HMS St Vincent, in Syria. He later served aboard HMS Winchester, HMS Eurydice and HMS Thetis before joining the HMS Superb as second in command under Edward Purcell.
During the Crimean war he took part in the attack on Kronstadt in The Baltic and during this campaign he devised new methods in gunnery which enabled gunners to extend their range. Boyd had a reputation for fearlessness in gunboat actions during this war.

He is known to have dived overboard on at least five different occasions during his career to rescue striken shipmates. By all accounts Boyd was an extremely well liked officer, both ashore and afloat, who inspired great loyalty among his crew members, preferring good example instead of the administration of corporal punishment, which was then still in use in the Royal Navy.

He was a man of deep religious convictions and could frequently be heard praying aloud or singing hymns in his cabin. Captain Boyd paid particular attention to the education and the spiritual welfare of young naval cadets under his care and he wrote and illustrated a great many instructional papers for their use on a host of subjects relevant to naval matters.  He eventually brought all of these together in the form of an instruction manual, which was approved by the Admiralty and financed by them for publication.  This became the standard training manual for young cadets joining the Navy.

Captain Boyd evidently had come to the attention of the Admiralty as a man of unusual ability as, just prior to his death, he had been offered command of H.M.S.WARRIOR, the latest and largest iron warship in the world which had just been launched.

He became a Captain in 1856. He was appointed Captain of the HMS Conway in 1857. A year later, he became Captain of HMS Ajax and commander of the Dublin District of the Irish Coast Guard.

February 1861 saw some of the most severe storms ever recorded on the east coast of Ireland. On the weekend of 8th and 9th February numerous ships faced horrific gales with many being lost to the sea. On Saturday the 9th the Neptune and the Industry sought the shelter of Kingstown harbour (now Dun Laoghaire). They attempted to enter the harbour but got caught in the waves and were smashed against the rocks at the back of the east pier.

Royal Naval guard-ship HMS AJAX was stationed in Kingstown. The ship was moored beside the East Pier in the harbour near where the tragedy took place.  When word of the plight of the two vessels on the outside of the pier was given to Captain Boyd at about 9.30 a.m. by the officer of the watch, Lieutenant Arthur Morell, he immediately ordered a boat to be manned.  One of the officers of the AJAX, Lieutenant Hugh McNeil Dyer, had been assisting the coastguards with gunner George Farrin and a boat’s crew in another part of the harbour where ships were in distress and he arrived back alongside the Ajax.  Captain Boyd and some additional crew members, which made a total of fourteen, went aboard this boat with heaving lines, rockets and ropes, and they rowed over to the steps on the pier at a point near to where the ships were being wrecked.  Various other people were on the pier, where waves were now coming over the top in places.  The NEPTUNE was being pounded against the jagged rocks at the base of the pier and the INDUSTRY was in a similar plight close by.  Captain Boyd immediately ordered a rocket fired to take a line to the NEPTUNE but this was blown back by the force of the gale.

The crew of the INDUSTRY managed to get a line ashore but it snapped like thread when it was made fast on the shore.  As Captain Boyd and some of the naval party, who were lashed together with ropes, ventured down the rocky slope towards the crew of the NEPTUNE, who were now all in the water and attempting to struggle ashore, the master of the INDUSTRY, James Collins, was swept off the bow of the vessel as he attempted to get another line ashore.  His brother, Daniel Collins was also swept off into the raging surf but he was rescued by Constable Dineen of the Dublin Metropolitan Police force (no. 82F) who managed with the help of another man to approach the waters edge and pull him to safety.  Many more men from AJAX and some civilians had joined the rescue party.

Lieutenant Dyer then ventured down to try to rescue a man who was face down in the surf but as he began to drag him in, a huge wave dashed him against the rocks and swept away seaman Thomas Murphy who had followed Dyer with a coil of rope.  Dyer’s head was lacerated and he was knocked unconscious momentarily.  As the wave retreated he was pulled to safety by William Ferris.  He regained consciousness almost immediately, just in time to see a tremendous wave sweep in and along the pier which engulfed everything.  Captain Boyd and a party of men were at the water’s edge attempting to drag a man ashore in a lifebelt.  When the huge wave receded, the captain and five of the rescuers were nowhere to be seen.  Captain Boyd had been heard to remark “Life is sweet” just beforehand.  Mr. John Walsh, the Lloyd’s agent in Dublin, was knocked backwards by the same huge wave and he had several ribs broken and suffered lacerations to his head and neck.  Another of the rescue party, Mr. Anderson, was also being swept away but was saved by catching his thumb in a crack between some of the rocks.  Lieutenant Hutchison, The Harbour Master was washed under by the wave but he emerged unscathed.  Only one man, Fenning, was saved from the NEPTUNE having been dragged ashore by constable Dineen while all but one of the crew of the INDUSTRY came ashore safely.

Almost all of the rescue party were badly lacerated and bruised and they were treated by the surgeon of the AJAX, Mr. Buchanan.  Mr. Walsh had a very bad head wound and had to be taken to hospital.  As he was being helped into a cab, the driver refused to take him stating that he did not want blood all over the inside of his cab.  The driver was then knocked down by the irate crowd and the cab, with Mr. Walsh now inside, was taken to the local hospital.  Lieutenant Morell led search parties throughout the rest of the day and a total of eight bodies were found, which included four of the crew of AJAX and all were brought to the revenue store.  A total of ten lives were lost in addition to the six from AJAX.  Captain Boyd’s body was not found until much later.

Much of the above is taken from an excellent and thorough article entitled "The Boyd Disaster" written by Cormac F. Lowth. It can be found here: https://www.mariner.ie/the-boyd-disaster#/

For images of the fine marble statue of Captain Boyd, please visit: https://www.stpatrickscathedral.ie/captain-john-mcneill-boyd-rn/

The 30.5 inch pipebacked blade retailed by Batten, 47 Fore St, Devonport, and marked as such. John Batten kept premises here between 1822 and 1839.

Decorated with etched fouled anchor, lion and royal coat of arms, as well as swirls of foliate decoration. It has three customised additional panels, to the right side of the blade is "Lt Boyd" and to the left, "Syria 1840" and "HMS St Vincent". Some small areas of dark staining and stabalised corrosion, but in the main the blade is bright and clean.

The overall condition is near excellent, and completely untouched.