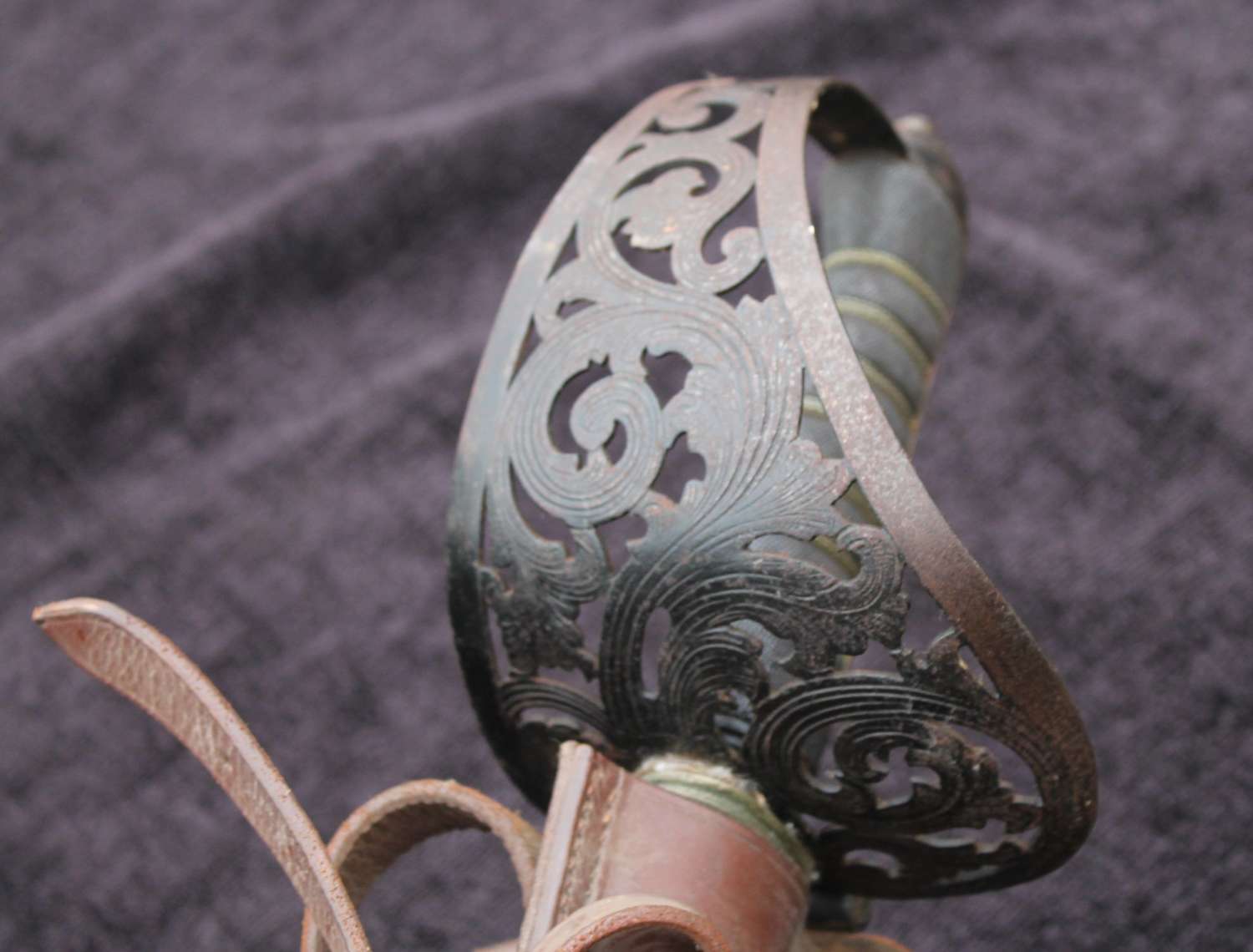 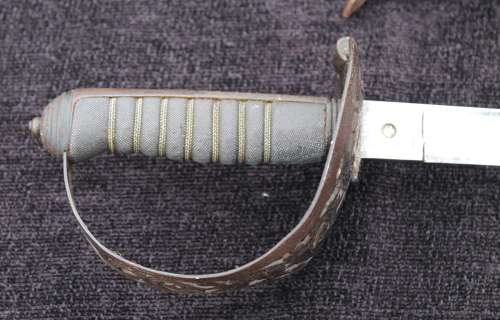 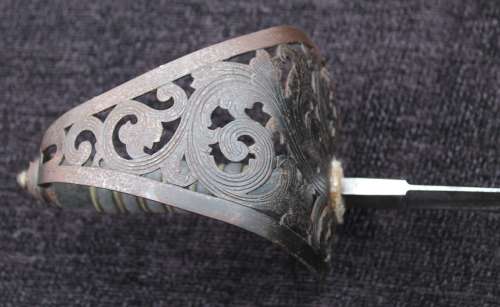 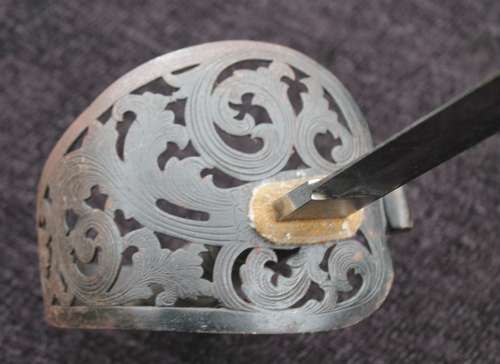 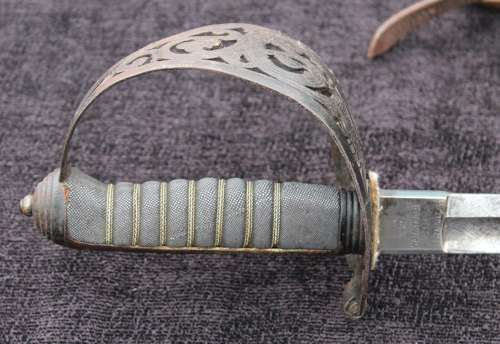 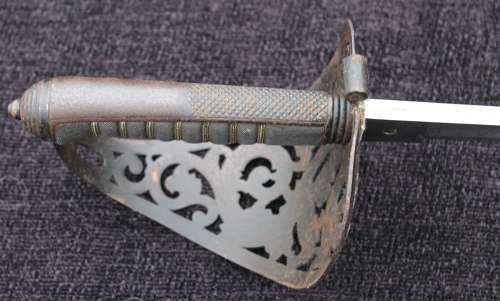 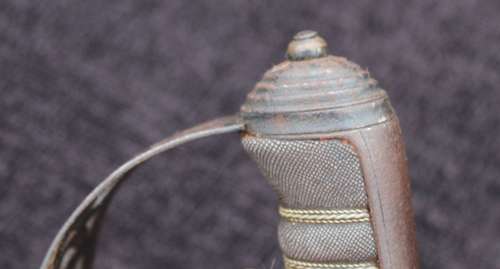 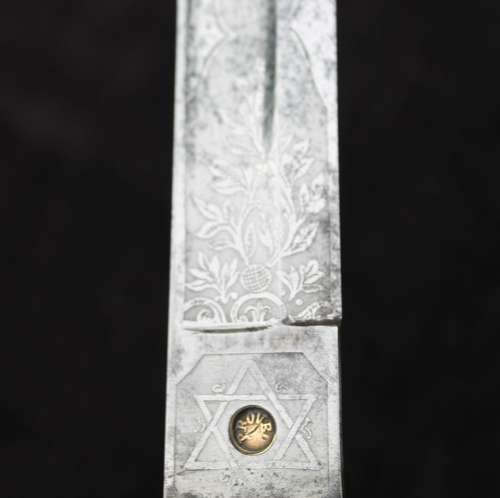 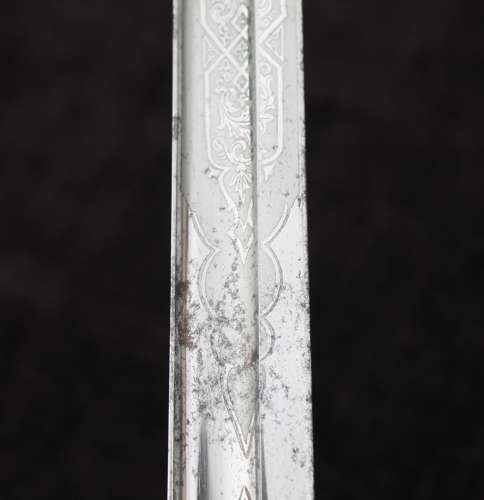 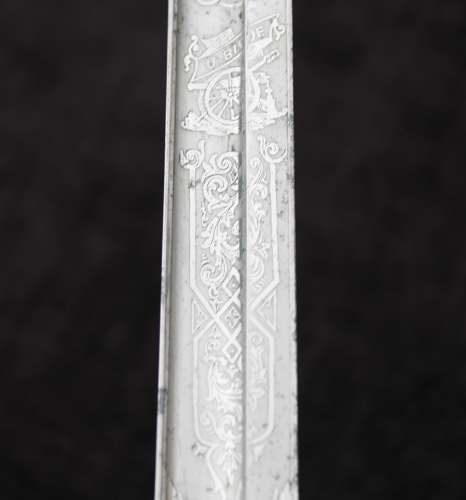 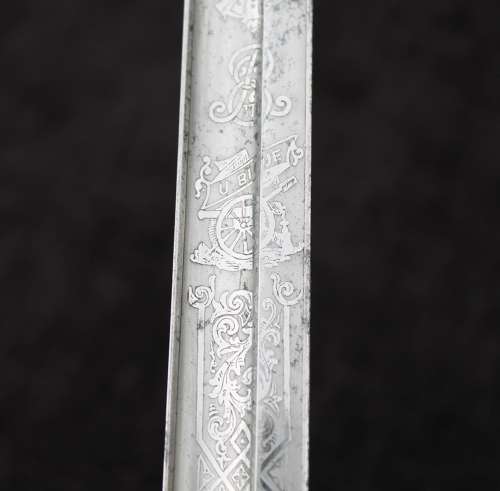 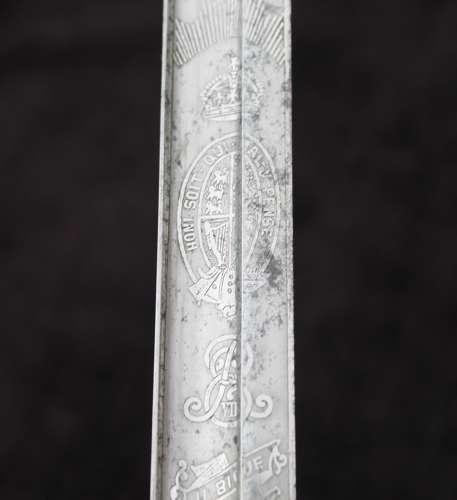 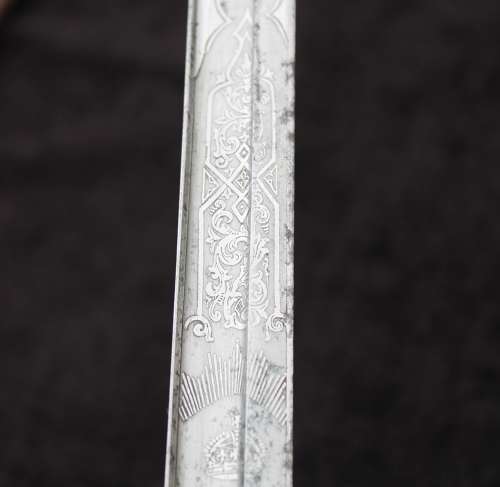 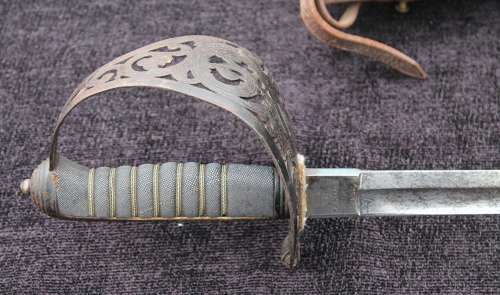 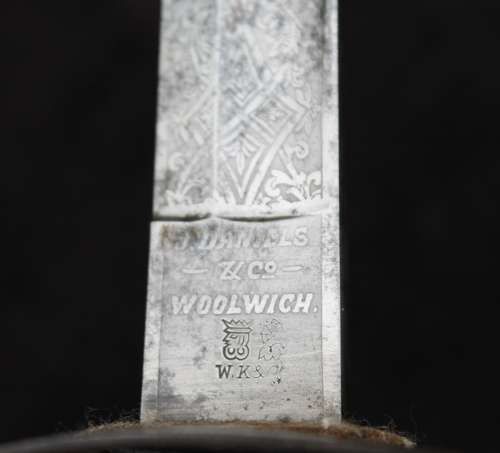 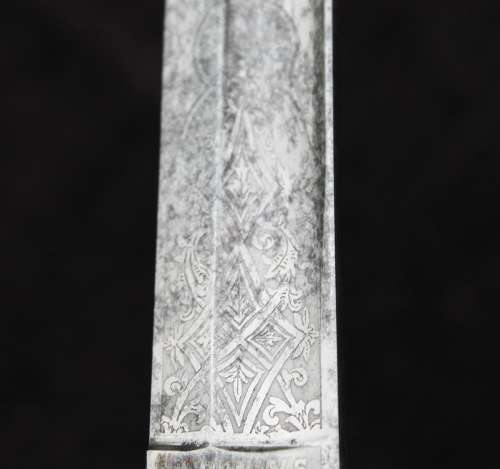 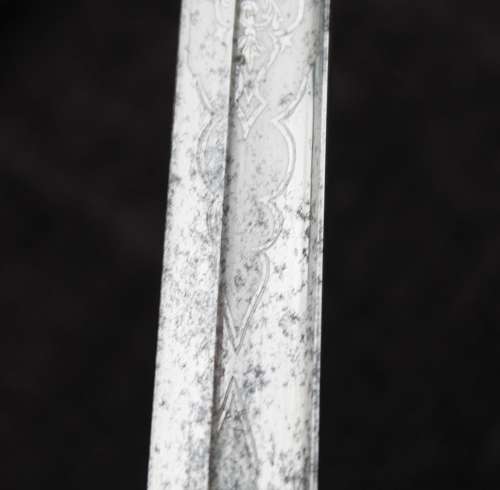 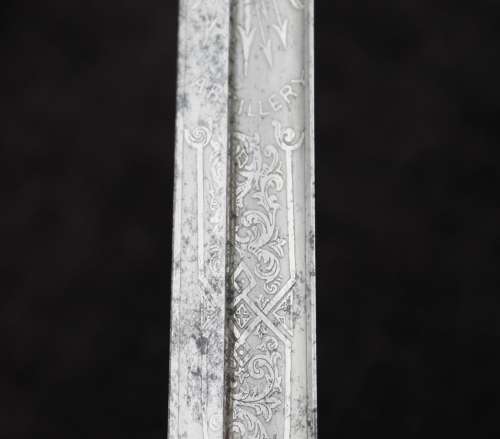 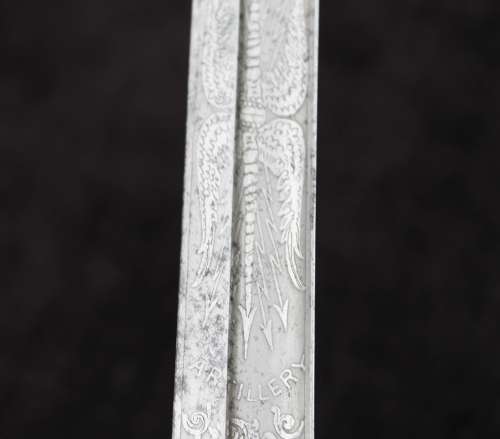 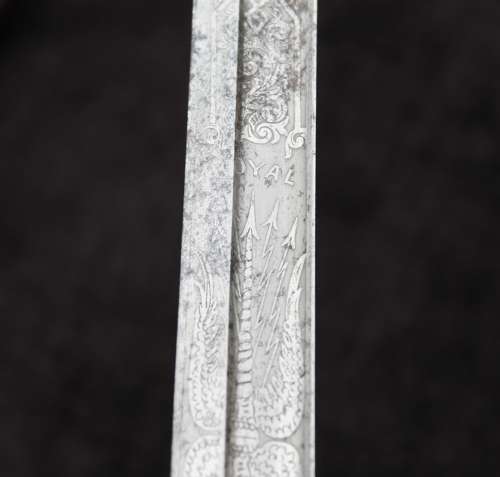 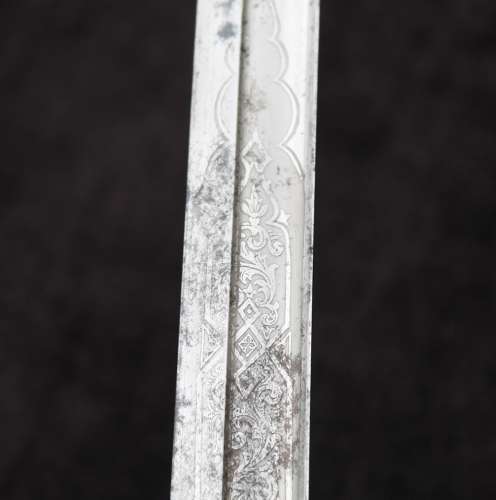 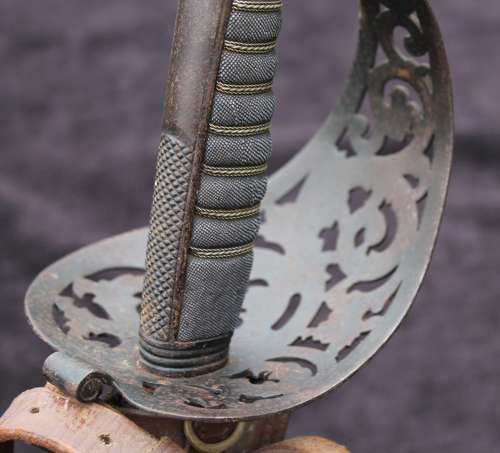 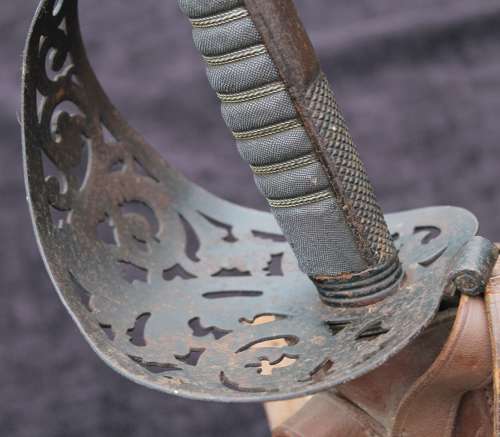 One of the more unusual swords I've owned, and likely made as a special order. The hilt being of the coveted "Scroll" form, commonly associated with Indian service as opposed to the standard 1821 pattern three bar hilt. Stepped pommel, with half chequered backpiece.

The steel hilt looks to have been dulled or subdued with a black finish, which would originally have prevented the reflection of sunlight. The whole guard is now covered in light rust, which will need removing. Shagreen grip complete and undamaged, retaining all of its original silver twistwire.

The 35 inch blade is in good condition, largely bright with some areas of staining. Retailed by J.Daniels&Co of Woolwich, this blade was actually produced by the German cutler Weyersberg, Kirschbaum &Co of Solingen.

The blade is etched with the regiment "Royal Artillery" and the motto "Ubique" feathered lightning bolts, as well as the usual floral etching. It also carried the Edward VII  royal cypher and the Tudor crown. Blade with some staining, particualy towards the point. But no rust or corrosion. It would benefit from a gentle polish to bring it back to its original glory.

In good untouched condition, housed in its field service leather scabbard complete with frog. Some "bend" to the drag, which could be corrected, if desired.

A highly unusual sword, likely s special order for an Royal Artillery Officer who found himself posted to India, where he knew he might actually need to rely on his sword.