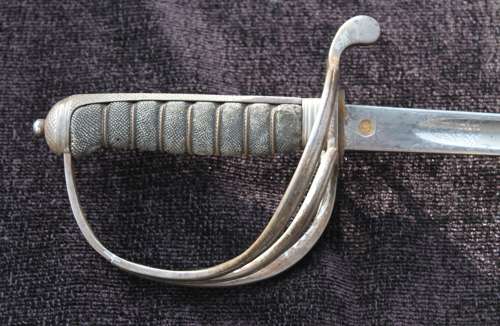 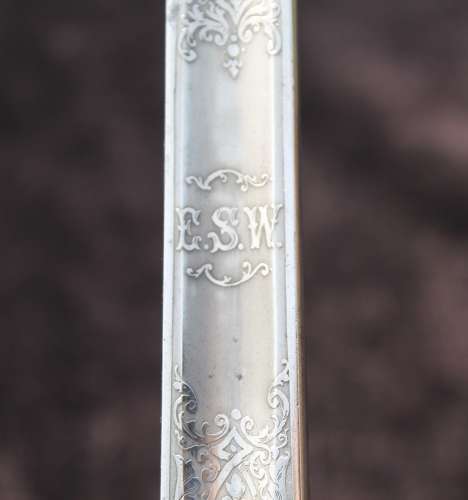 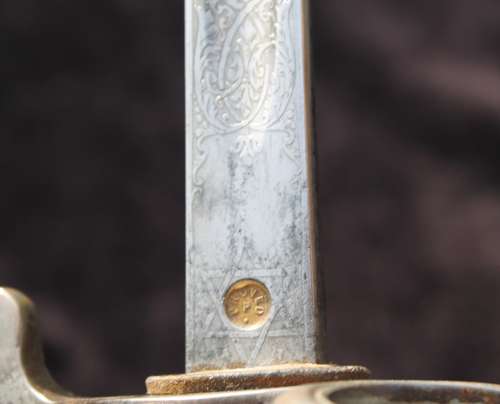 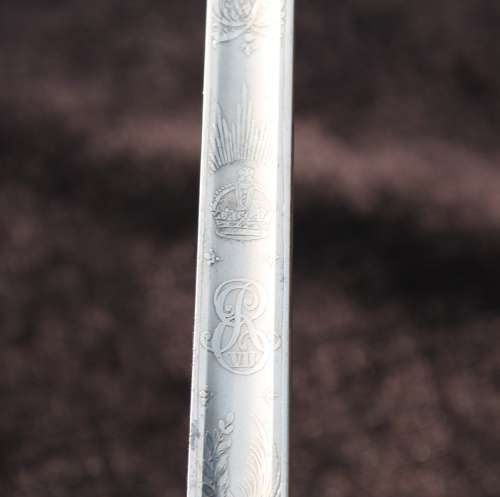 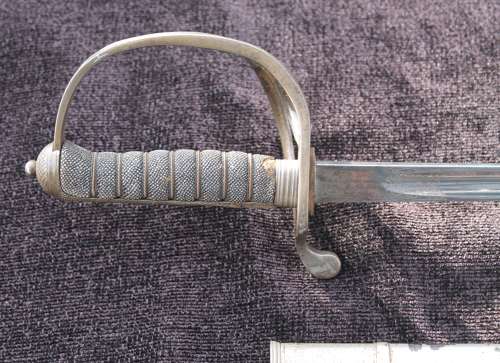 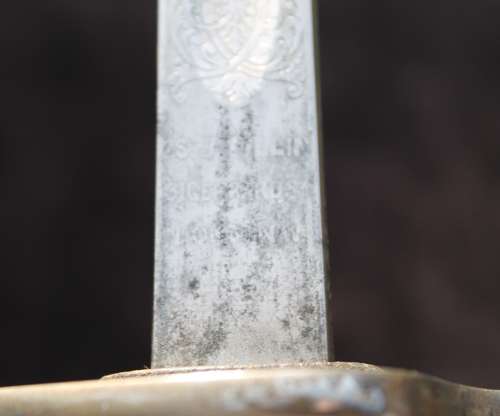 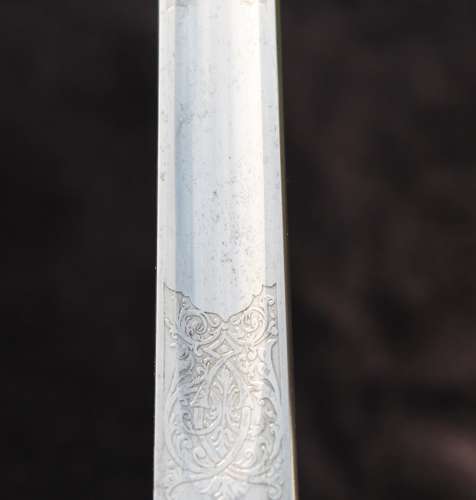 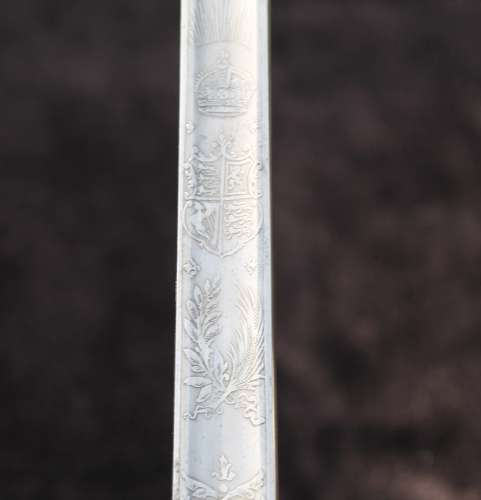 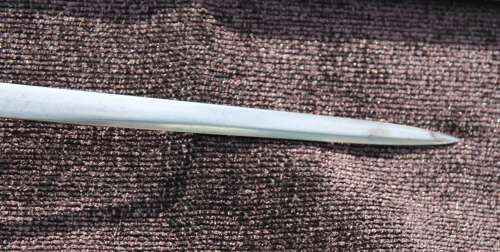 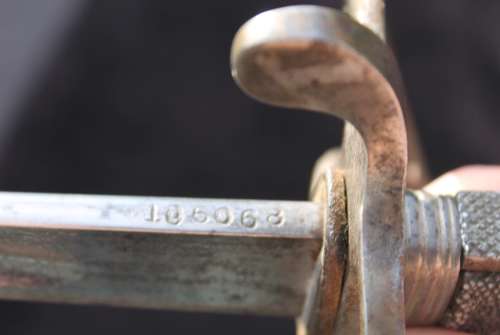 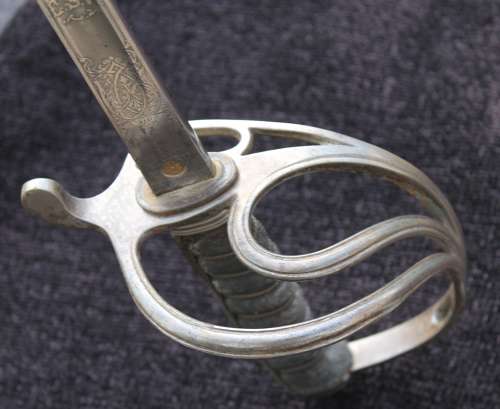 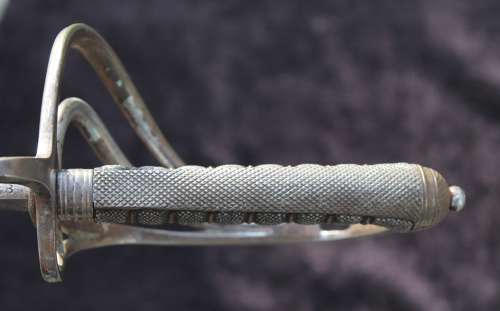 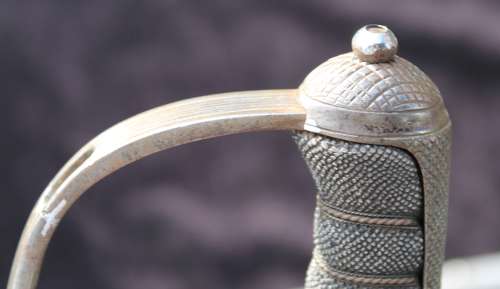 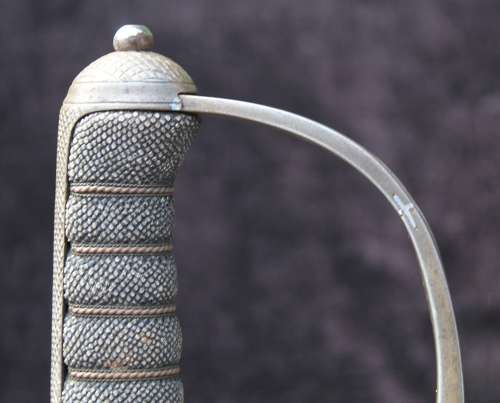 Slim, straight 32.5 inch dumbbell blade etched with Edward VII's cypher & owner's initial 'ESW' to one side, on the reverse the Royal Coat of Arms & maker's name Blade numbered on the spine 106068. Plated three bar hilt, shagreen grip & copper wire binding. Chequered backstrap and pommel. Plated steel scabbard. Loss of plating to the scabbard and hilt, the hilt with light surface rust. Shagreen grip 90%+ complete, with a small area of loss. Blade generally clean and bright, loss to the ricasso with the makers etch, but still legible. Old working repair to the guard below the slot for the sword knot, a traditionally weak point on these swords.

Having been originally comissioned into the Essex Regiment, it seems likely that he kept his original sword blade, and had it rehilted with the correct three bar hilt of Army Service Corps pattern.

Educated at Felsted, and RMC Sandhurst. White joined the Essex regiment in 1908, followed by the West India Regiment and finally transferred to the ASC in 1912 as a 2nd Lieutenant. This would explain his 1897 pattern sword being converted to a 3 bar hilt, as worn by the ASC. Brigadier White was awarded the following decorations:

(Order of St John was awarded in recognition for 25 years service as President of the Chichester Branch of the St. John Ambulance Brigade)

Brigadier White's Medals are featured in: "Gallant and Distinguished Service - The Royal Corps of Transport Medal Collection 1794-1993" by David Owen.

A comment in the above book from Brigadier White, upon being asked which of the medals he had to work hardest for: "I have no doubt whatsoever that it was the 1911 Coronation Medal because on that June day I had to stand in the Mall for 12 hours in blazing sunshine, largely to attention, in blue patrols (uniform) and I have never had such a dreadful day in the Army in my life"

"The History of the RASC in WWII" mentions that Brigadier White was DST at AFHQ in North Africa circa 1943.

White also belonged to the "Ancient Order of Froth Blowers", which seems to have been a 1920s drinking man's club:
White whilst holding the rank of Major, is listed as Senior Blower of the "Nil Sine Spuma" Vat, at Buller Barracks, Wiesbaden, Germany - he had reached the rank of "Tornado". (To reach the rank of "Tornado" one had to recruit 100 members)