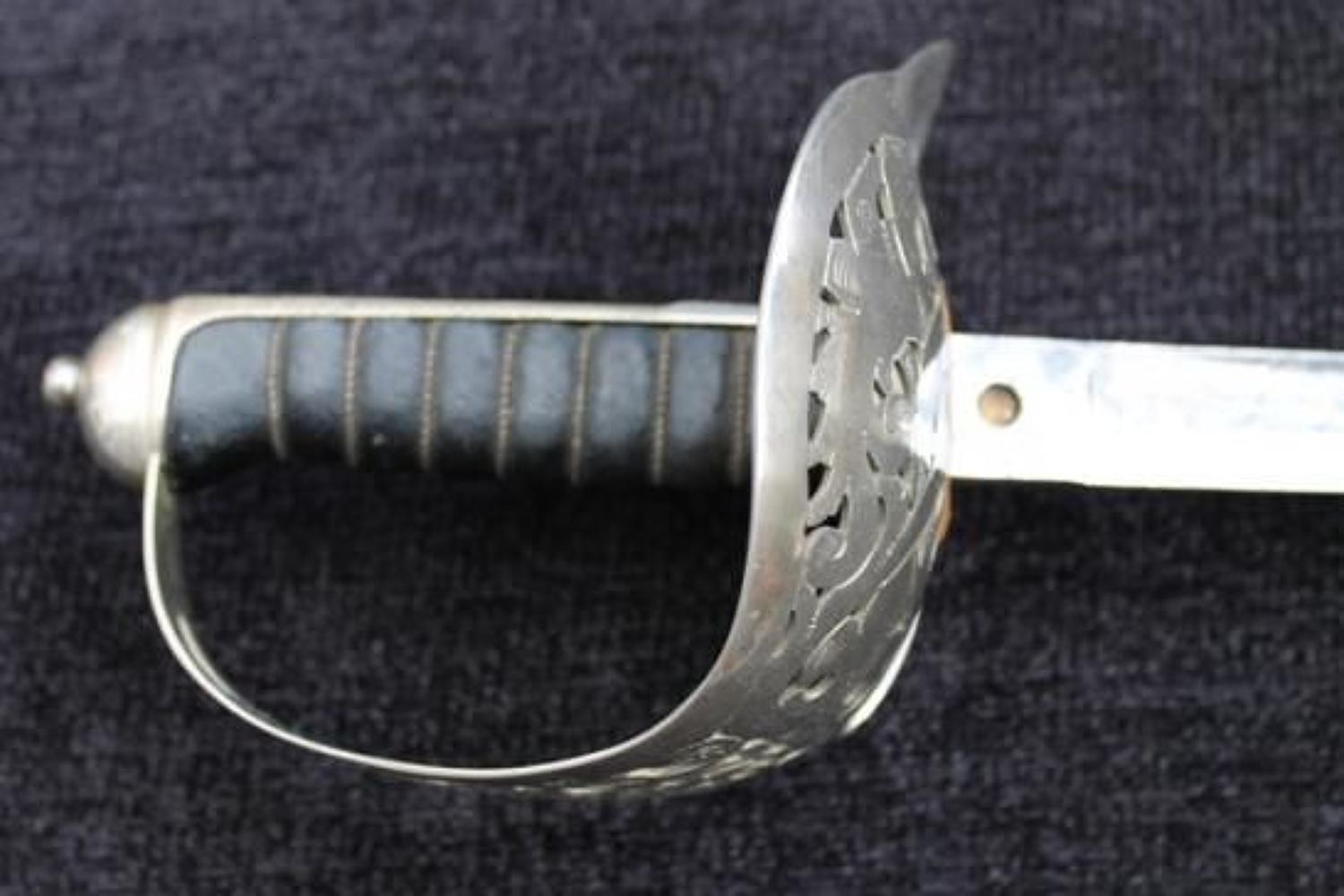 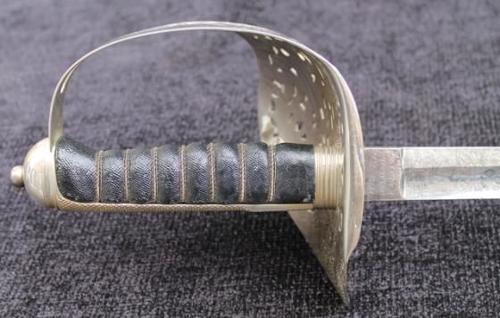 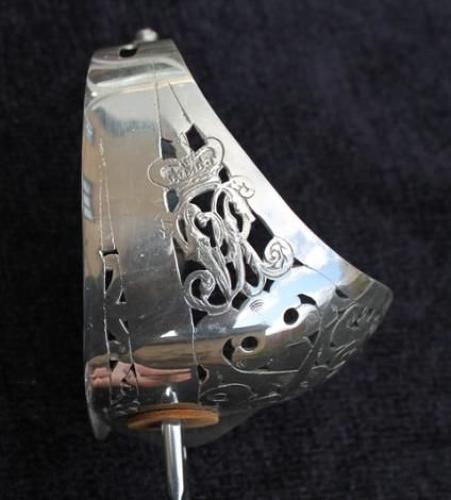 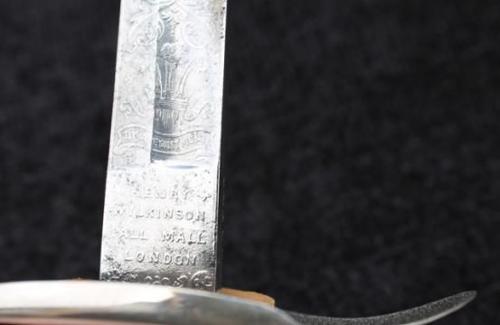 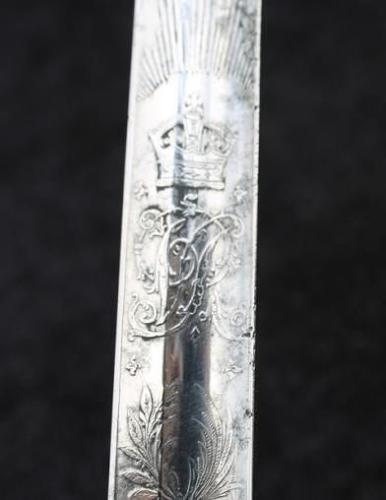 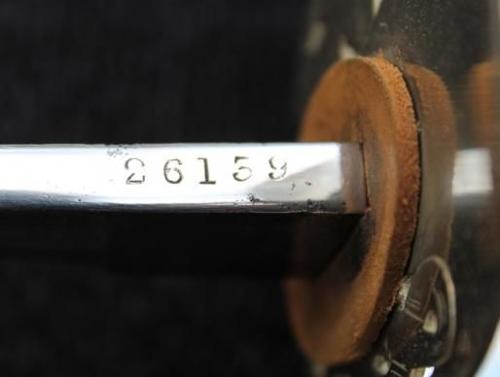 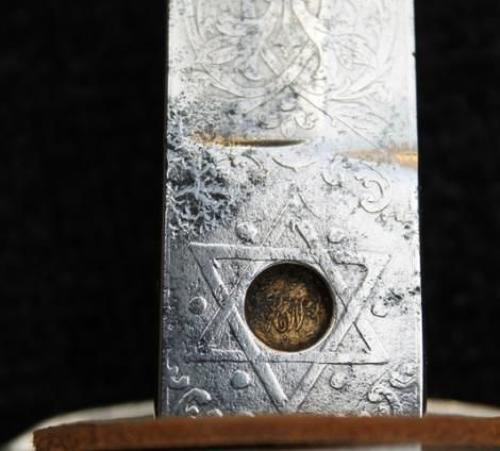 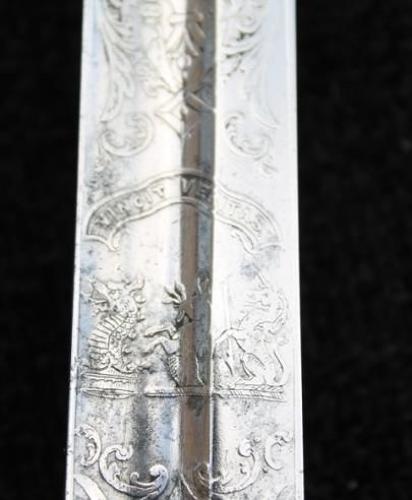 The originally the sword of Brigadier William Ewbank (1865-1930) and later refurbished and carried by his son, Major William Alan Ewbank M.C. (1922-2013) Both of which served in the Royal Engineers.

Born in London 1865, and was educated at Calgary Alberta and Cooper's Hill Engineering College, Egham, Surrey, part of the University of London. RMA Woolwich.

Commissioned into the Royal Engineers as follows:

Posted to Orissa in 1896 on famine relief work.

Of his 37 years service, over 30 were spent in India or Burma.

Born in Weymouth on August 30, 1922. He attended Wellington College, and completed a crash course in engineering at the University of Birmingham and was commissioned as a 2nd lieutenant in the Royal Engineers. Later, he went on to earn his Bachelor of Science at the Royal Military Academy of Science, Shrivenham.

His first overseas posting during the Second World War was to Northern. Iraq, followed by North Africa and Italy. He was wounded in North Africa and was awarded the Military Cross. In Italy, he met his first wife, Frances McKean, who was an American Red Cross worker there for the last two years of the war. They married in England in 1947.
He continued to serve in the Army in various posts in England and Wales before being sent to Kenya around 1953 during the Mau Mau uprising. After the family settled in Yateley, Hampshire his wife died in 1957, leaving him with two small daughters to raise. He then left the Army to teach mathematics at a local boys' school in Yateley, where he continued to teach for the next seven years.

In 1964, he married his second wife, Dr. Frances White, of the United States, who persuaded him to move with his daughters to the U.S. They both procured positions teaching at Taylor University in Upland, Indiana; he went on to earn a master's degree at Ball State University. His second wife died March 16, 2013.


The sword itself is completely refinished, and done to a high standard, probably back at Wilkinson, when his son was commissioned. The blade was rehilted in or around 1897 in line with the new regulations, and would originally have been hilted with the 1857 special pattern brass engineers hilt.

All the shagreen and silver twistwire binding is complete, and in good condition.There is little to no loss to the plating of blade or hilt, and could easily still be carried by a serving officer.

The plated dress scabbard has not fared as well, and would benefit from some gentle cleaning, to make it more presentable.

The 32.5 inch blade is in excellent bright condition, retaining its original finish. It is engraved with initials, and usual crown and foliate motifs.