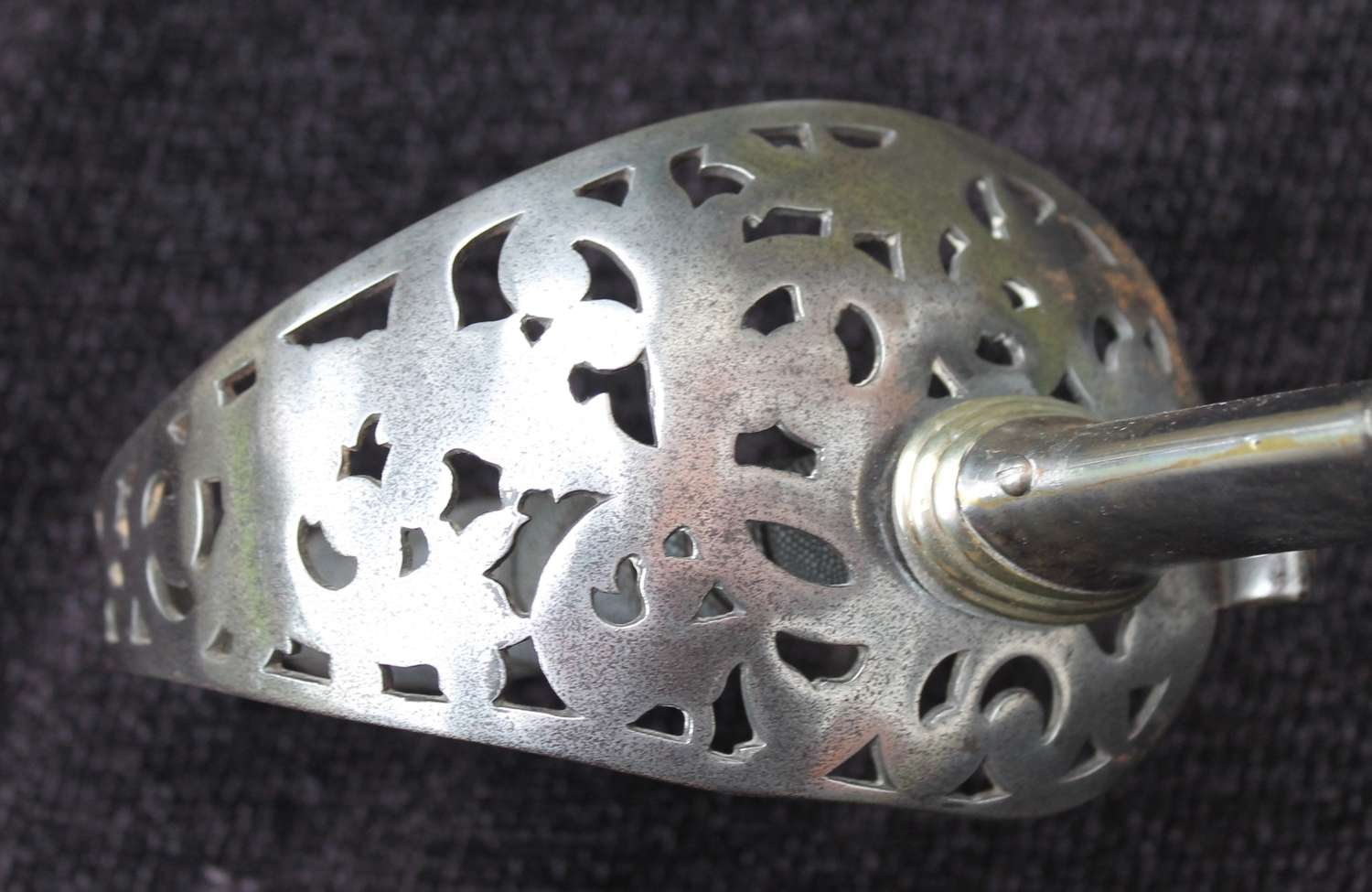 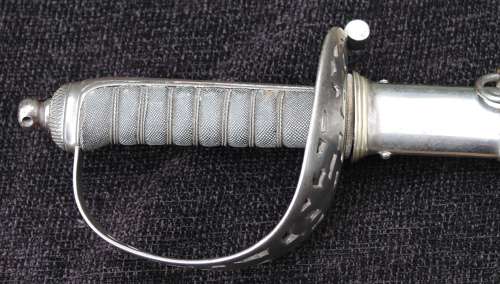 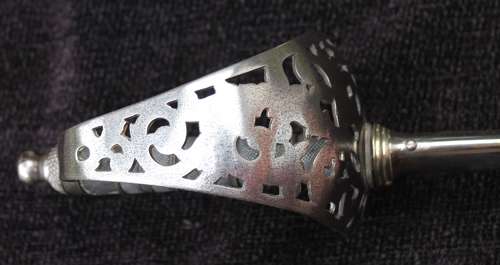 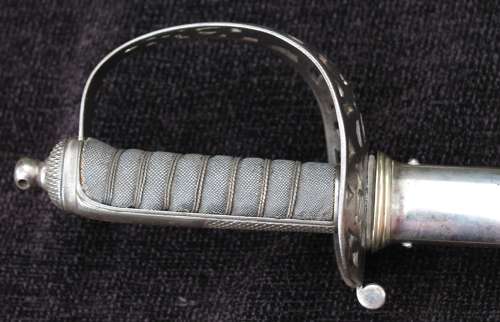 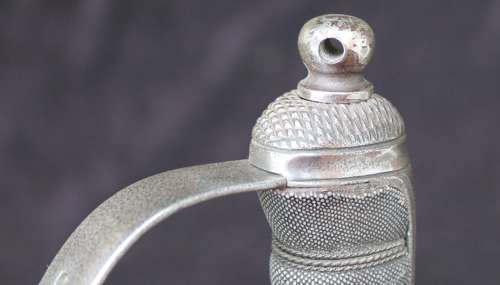 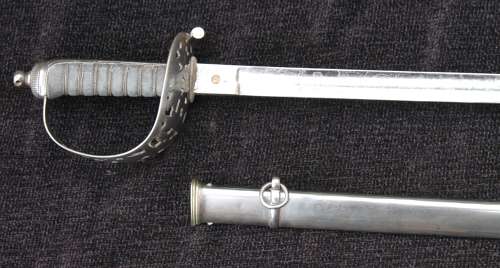 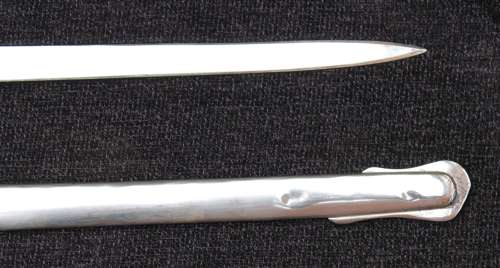 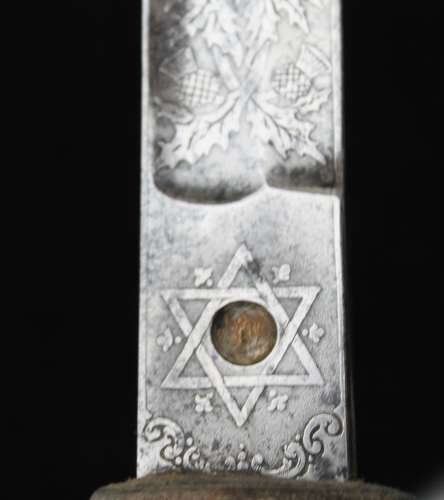 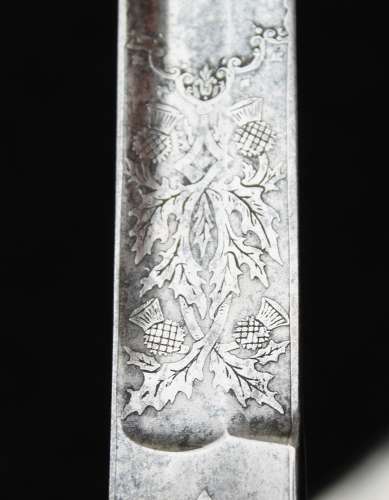 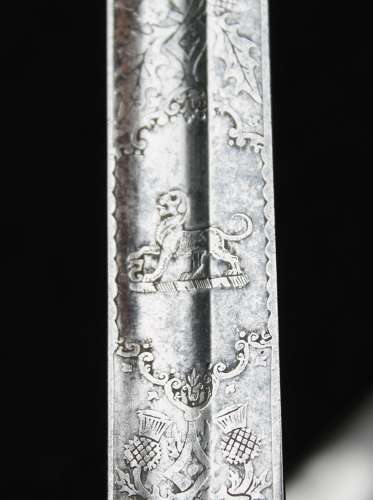 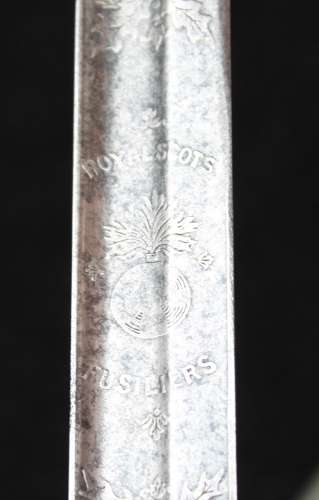 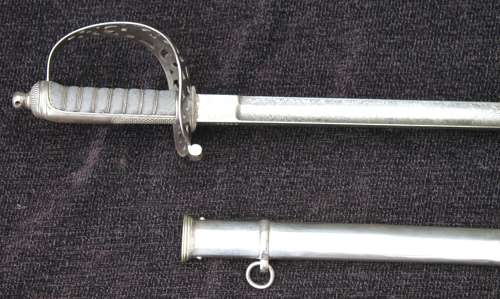 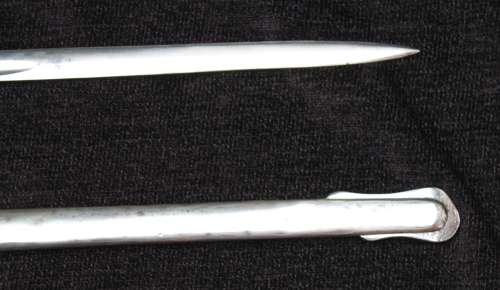 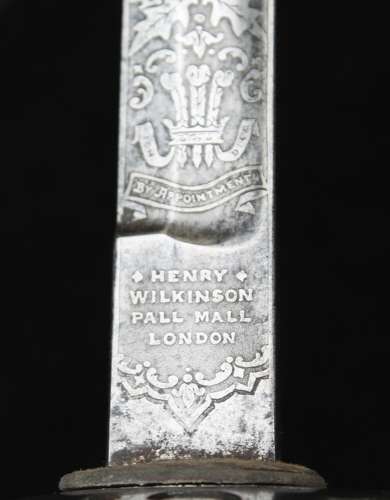 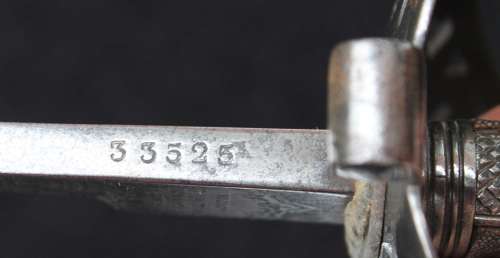 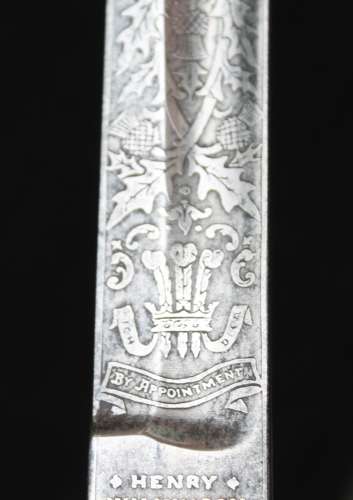 Single fullered blade with a length of  34.5 inches produced by Wilkinson. The serial number on the blades spine reveals this sword was produced in Novemeber 1895, and sold to an "H.E. Gogarty"

The following biography partially taken from The Worcestershire Regiment Website, which may be viewed Here. It also features an image of Colonel Gogarty.

Henry Edward Gogarty was born at Limrick, Ireland in 1869, son of Henry A. Gogarty, a physician, and Emily Gogarty.

He was educated at the Royal Military College, Sandhurst and commissioned in to the The Royal Scots Fusiliers on the 22nd August 1888 as a Second Lieutenant. He served with the Zhob Valley Expedition in 1890.

On the 16th March 1898 he was seconded for service on the Staff and promoted to Captain on the 1st November 1898.

He served in the South African War 1899-1901 on the Staff, and later with the South African Light Horse. He took part in the Relief of Ladysmith and was twice mentioned in despatches, and awarded a Brevet of Major.

He married Grace Emma Sargent at Canterbury, Kent in 1903.

Captain and Brevet Major Henry E. Gogarty, was appointed to be a General Staff Officer, 2nd Grade, on the 6th December 1907.

On the 24th October 1908 he was promoted to Major and transferred to the Worcestershire Regiment.

On the 21st February 1912 he was granted brevet promotion as Lieutenant-Colonel.

On the 9th June 1913 as Brevet Lieutenant-Colonel, he was appointed Chief Instructor and Staff Officer of the School of Musketry, Hythe.

On the 4th September 1916 he was appointed Chief Instructor and Staff Officer, Grade 1, at Machine Gun Corps. Training Centre and granted the Temporary rank of Colonel whilst so employed.

At Picquigny on the 5th July 1917 he was given command of the 2nd Battalion Worcestershire Regiment . On the 26th September 1917 during the Battle of the Menin Road, he was wounded in four places but refused to leave his post, and remained in command. For his gallant leadership he was awarded the Distinguished Service Order (D.S.O.).

"For conspicuous gallantry and devotion to duty when in command of his battalion. He was wounded early in the operations, and though he was suffering much pain he refused to leave his post, and remained in command during three days of heavy fighting. He showed great courage and resolution, and largely contributed to the successful defence of the sector against repeated enemy counter-attacks." (London Gazette 26th November 1917)

On the 18th November 1917 he handed over command of the Battalion to Lieut.-Colonel L. C. Dorman, M.C.

On the 20th November 1917 he took up a Staff appointment in Italy as Area Commandant attached to Headquater Unit, a position he held until 20th May 1918.

He was appointed A.A.G. (Asistant Adjutant General) at Staff Headquarters on the 21st May1918.

He was made a Companion of the Most Distinguished Order of Saint Michael and Saint George (C.M.G.) London Gaztte 1st January 1919.

On the 10th June 1920 he retired from the Army and granted the rank of Colonel.

The field officers hilt of 1857 pattern with scrolled decoration, now well polished. Backpiece with chequered thumb rest, and chequered pommel with removable pommel nut with hole for a T bar. This to enable the fitting of the Royal Scots dress hilt. Shagreen grip in good condition and complete with its twistwire binding.

The single fullered blade with a length of  34.5 inches, of which the last 20 inches towards the point have been service sharpened. Wilkinson address and proof marks to the ricasso, with serial number to the spine.

The blade etched with family crest within a cartouche. The flaming grenade badge is surmounted by "The Royal Scots Fusiliers" as well as thistle and foliate decoration. The otherside of the blade carries the badge of St Andrew with further foliate and thistle etching.

General condition is very good, some minor staining to the blade, light pitting to the hilt. Minor staining/patina to the scabbard with small dings and dents but generally a lovely untouched sword with plenty of research potential.

Supplied with a digital copy of the Wilkinson Ledger page, confirming the original owner.