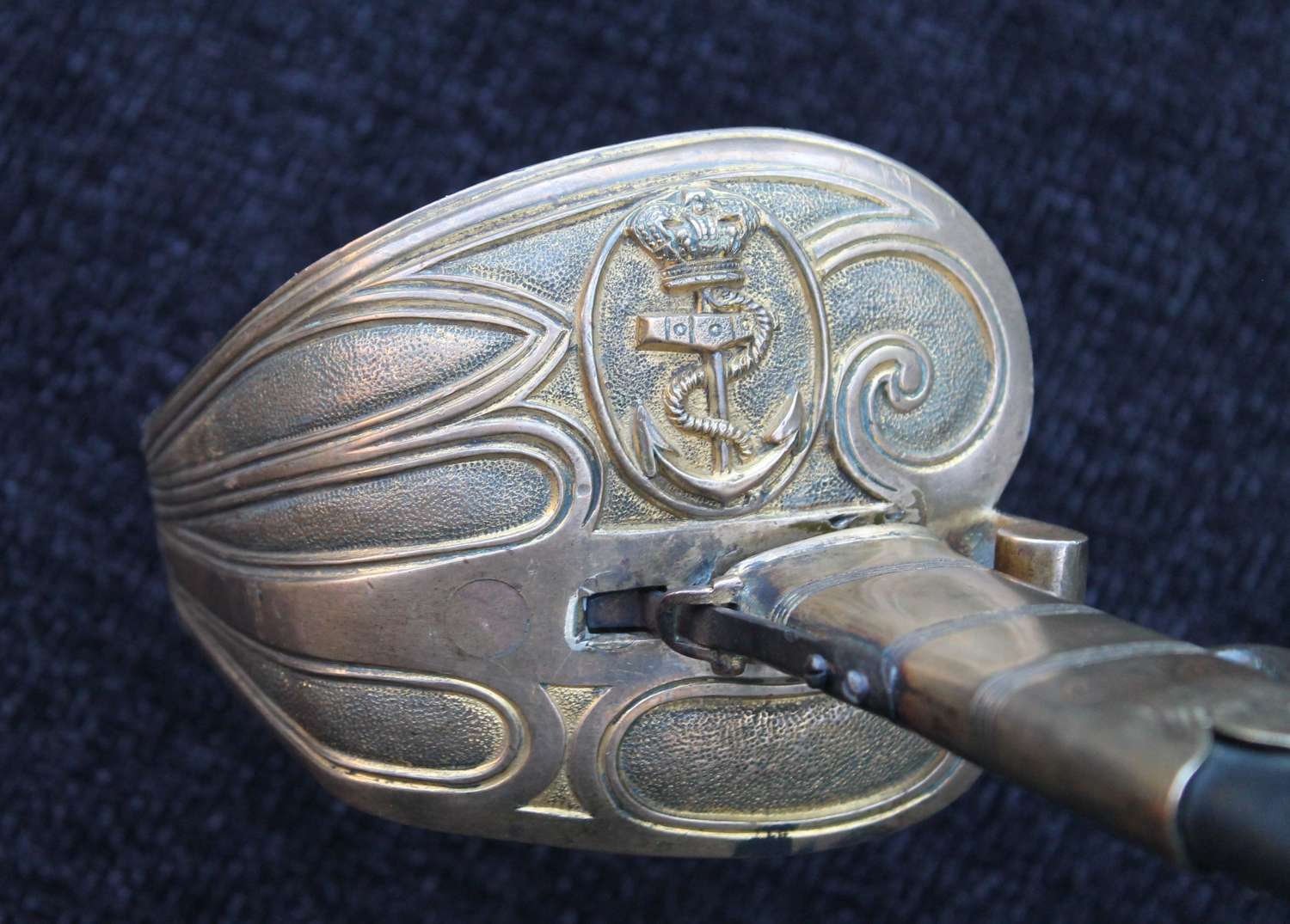 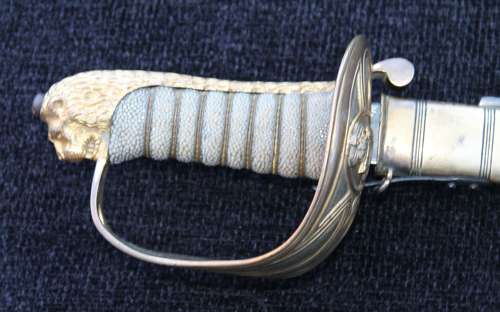 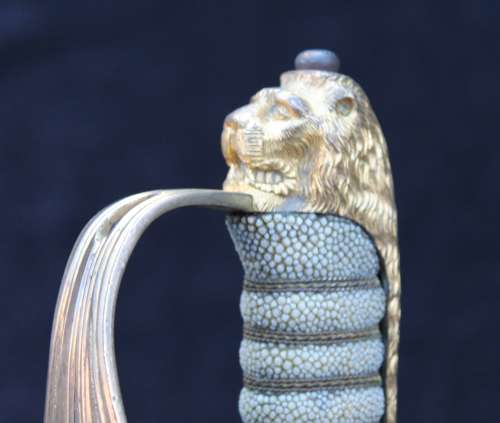 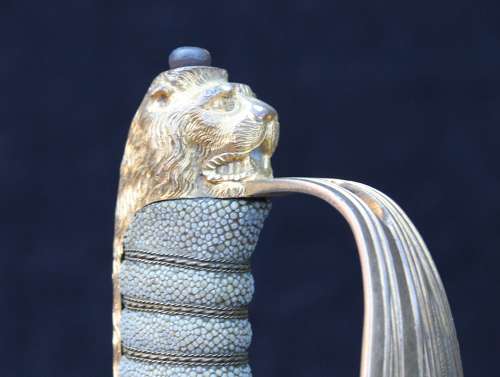 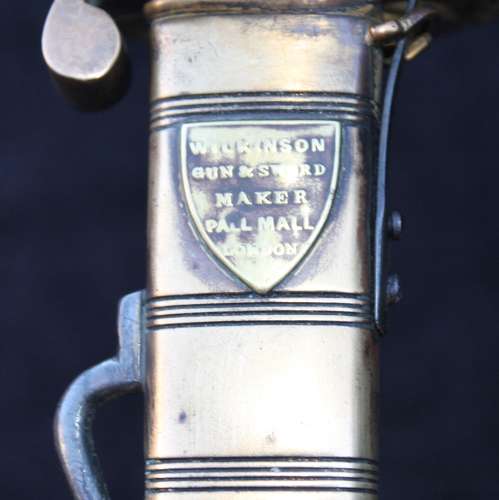 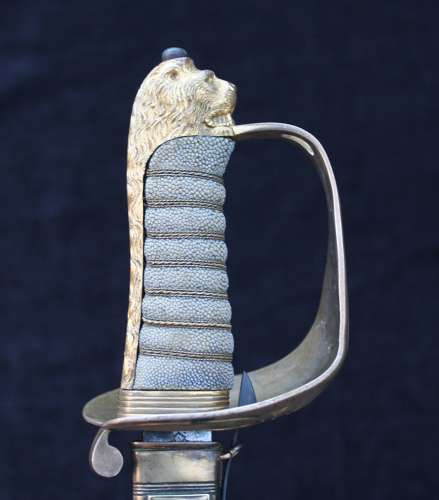 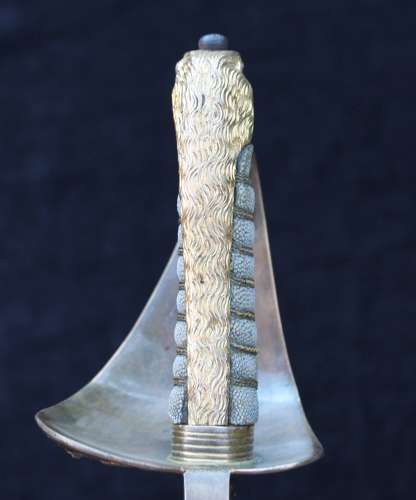 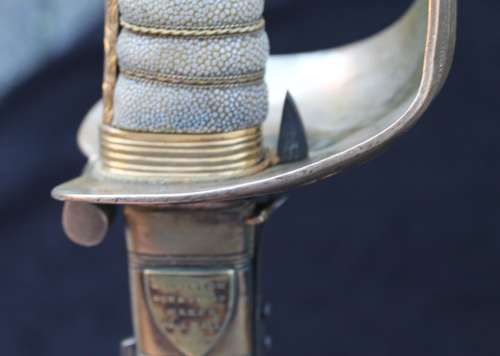 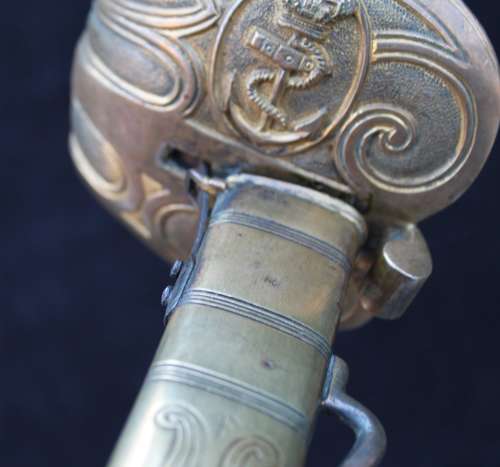 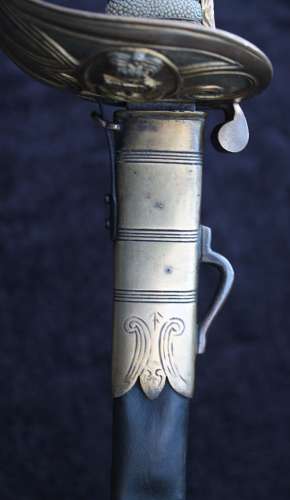 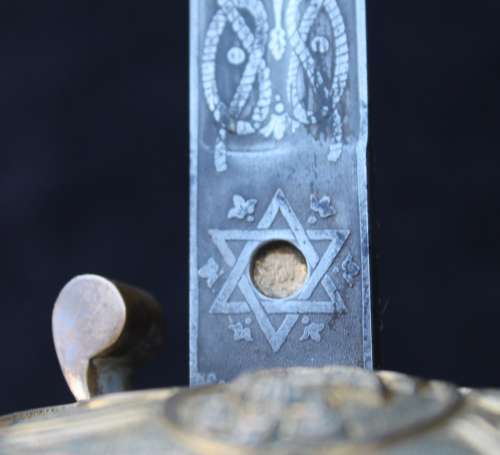 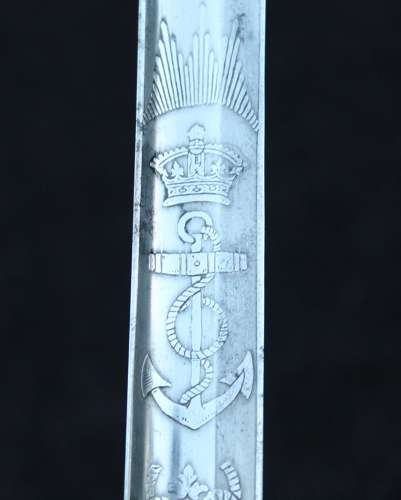 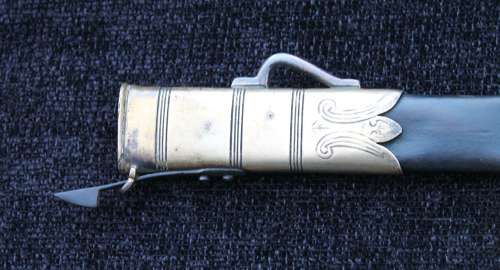 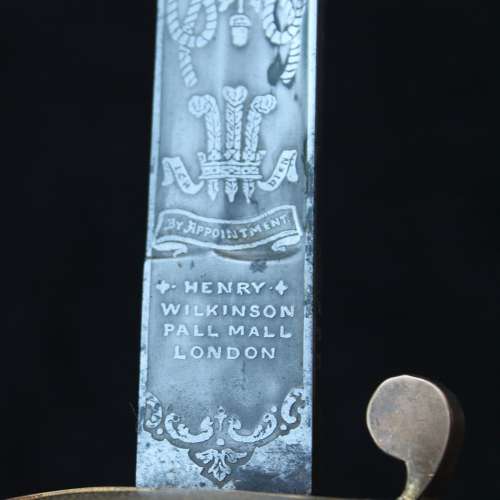 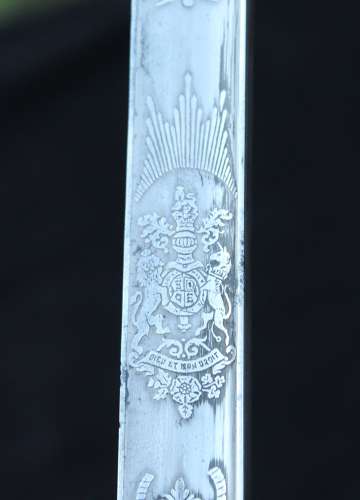 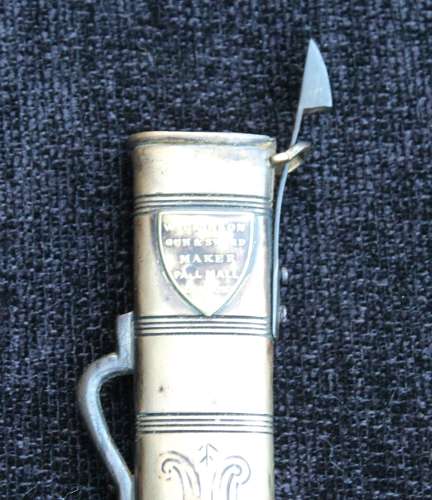 This example was, I beleive, configured for somebody who had injured thier right hand, possibly with the loss of a thumb. The guard is solid, and does not have the customary folding inner guard which locks into the scabbard. Instead, it has a spring catch, more usually associated with Midshipman's dirks. This is located on the outside face of the grip, rather than the back, indicating it was meant to be operated by a forefinger.

The grip is unusually chunky, which again would allow an officer missing a thumb to better grip the sword firmly. When held without using ones thumb in the right hand, the blade is exceptionally well balanced.

In addition to the above, the scabbard does not have the traditional loose hanging rings to the scabbard mounts, but solid brass hoops. The would allow the clipping and unclipping of a sword belt to be much easier for a disabled hand.

In every other respect, the sword is as one would expect an 1827 Pattern Naval officers sword to be, well constructed, and with fine detail to the hilt mounts, in particuarly the rather "fat" lion pommel, and superb quality blade etching. The sword is "as found" and uncleaned, but is in very good untouched condition, with the blade solid in the hilt. Minor staining to the blade, with some light pitting to the spine.

The sword is housed in the correct pattern black leather scabbard with gilded mounts. The top mount carries the Wilkinson sword shield. A small amount of lether shrinkage, but generally, a very good fit.

The Wilkinson register for this sword presents something of an enigma. This sword (33588) is dated 3rd of January 1896. It is described as having a 31.5 inch blade, with a width of one inch. It also states that the guard is "solid" and it is of "Navy" pattern. Aside from that the listing is blank. Every other listing on that page is filled in fully.

So I looked at the previous page. The preceding sword, 33587 is also listed as a naval sword, and is fully filled in. However, at the bottom of the page, are entered the details for what is presumably our sword. One can ony assume that both orders were taken on at the same time, and for some reason a new proof ledger page wasn't available. It isn't the first time I have encountered such an occurence whilst studying these documents. The real clincher, is that in brackets after this rather Ad Hoc entry, is that the "remarks" column is the word "Special", which 33588 most certainly is! Therefore, I would say that it is beyond reasonable doubt that this was the sword owned by "Lt P. Walter, RN".

Needless to say, copies of both entries will be provided to the new owner.

Philip Walter (3rd march 1865-28th June 1942) joined the Royal Navy at HMS Britania in 1878. He was the son of John Walter III, owner of "The Times" newspaper, Liberal MP, and inventor of the "Walter Press" which pioneered modern newspaper printing presses.

He was promoted Lieutenant in November 1887, so it seems likely he would already have owned a sword prior to 1896, when this sword was ordered from Wilkinson of Pall Mall. It will be for the new owner to establish when, and how he came to require a new sword with such modifications.

He was further promoted to Commander in December 1900. From 1897 he held a string of commands, starting with HMS Harrier, moving to HMS Britomart in 1900, and then to HMS Apollo in 1904, and HMS Brilliant.

His son, Philip Norman Walter (1898-1984) was also a Naval Officer, serving in WW1 and WW2, earning an MID for actions agains Submarines on the destroyer HMS Fame, and a DSO for actions in Norway in 1940. It is possible, that he also carried this sword.

A fascinating and unique sword, with plenty of room for further research.