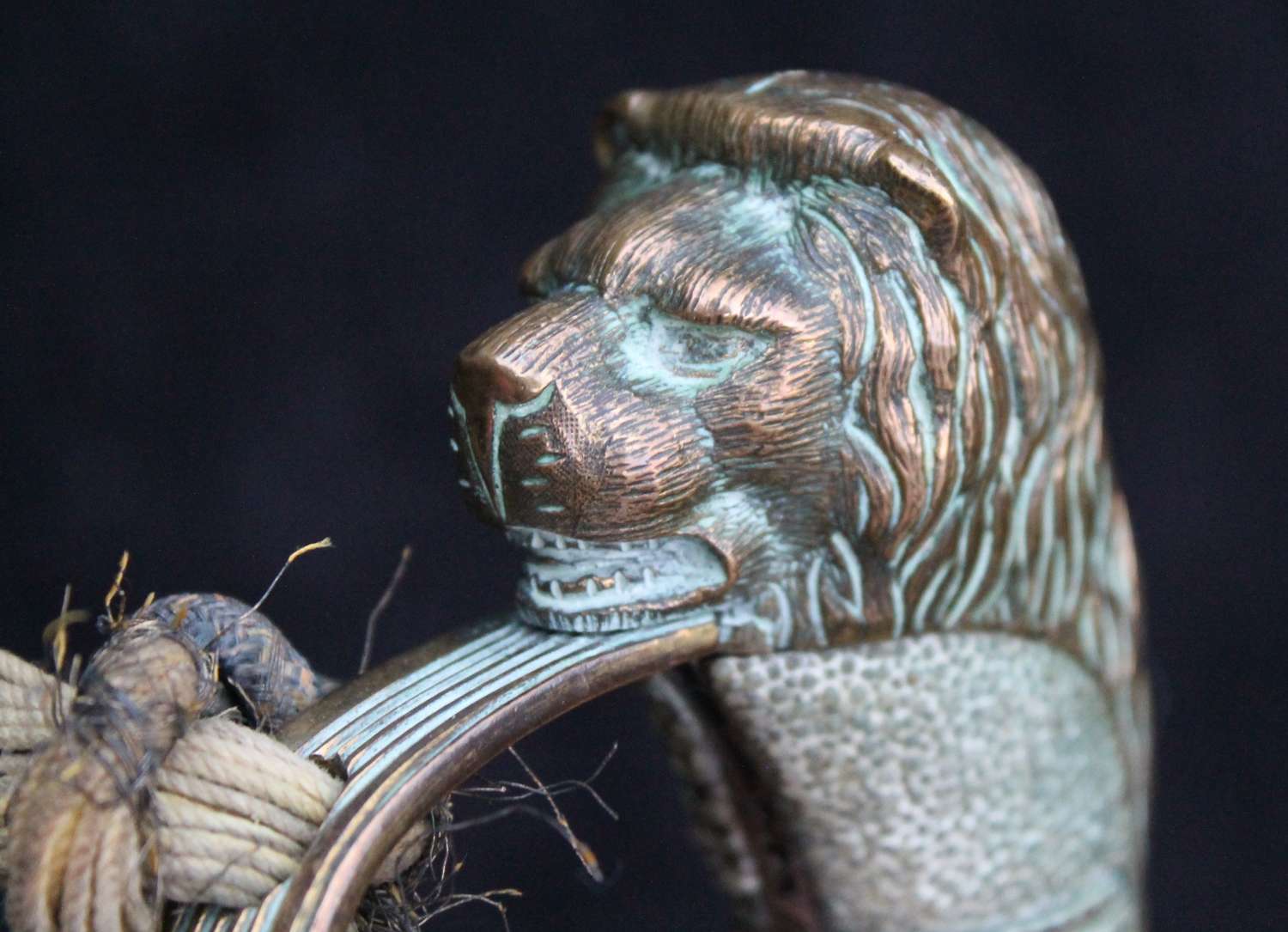 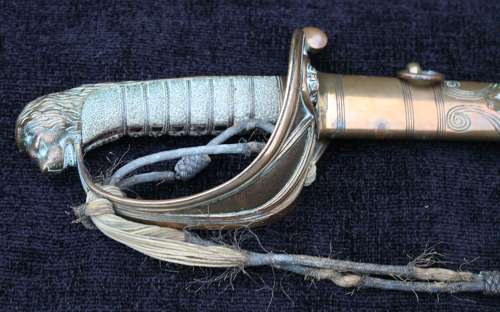 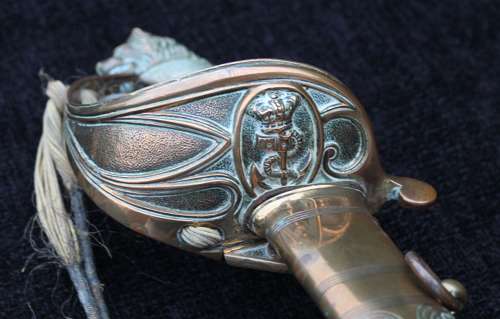 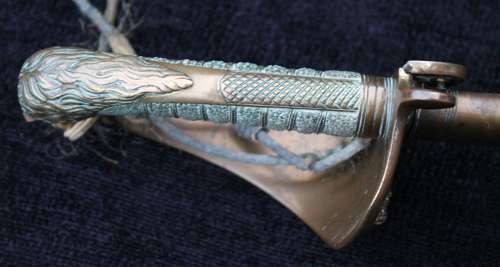 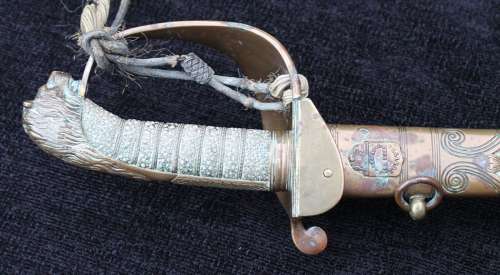 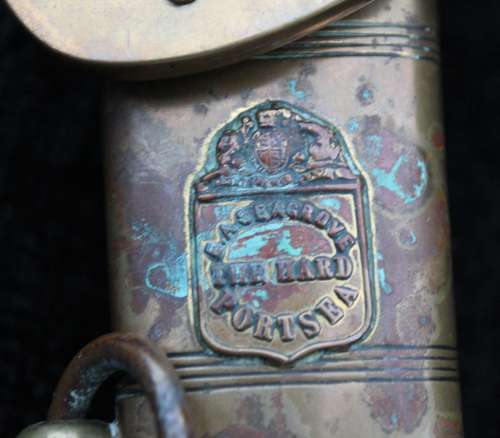 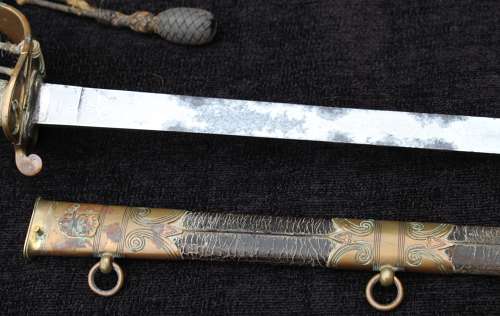 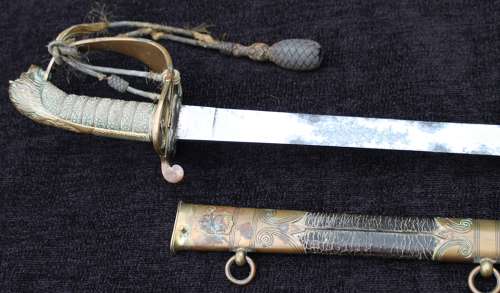 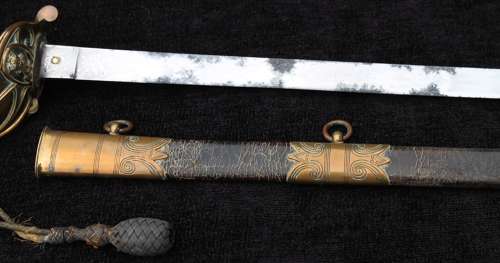 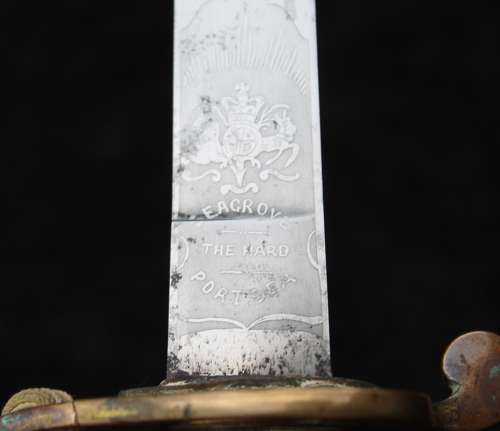 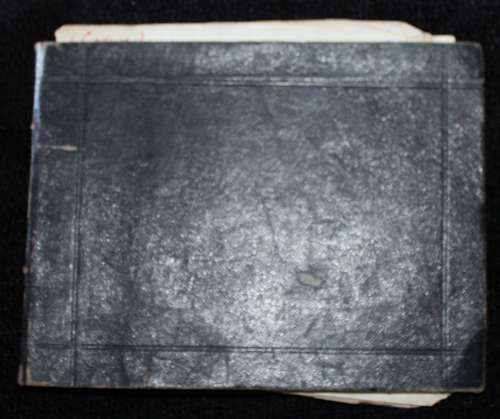 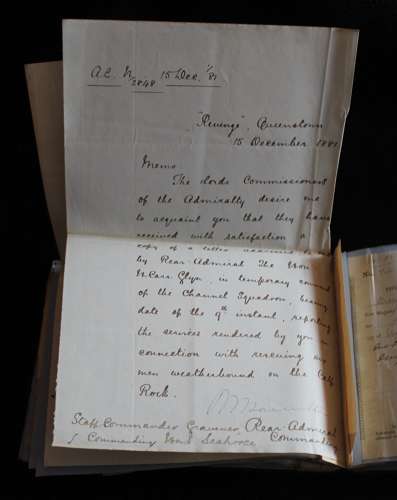 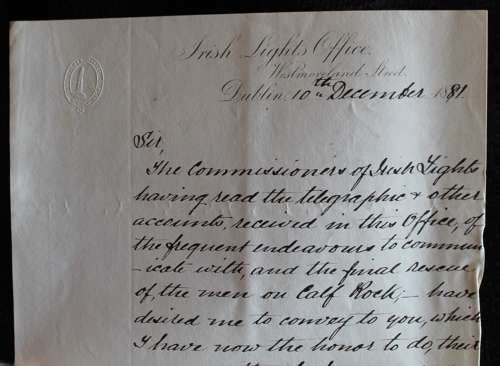 This sword is attributed to Captain John James Atkins Gravener RN, and will be accompanied by his Officers Log book which details his service, conduct and ability in the Royal Navy between April 1853 to 1885. It contains various letters and written reports on his performance from the Captain's of the ships he served aboard, as well as Admiralty letters.

The book covers his service up to the rank of Staff Commander, but I have found reference to him as having the rank of Captain.

Towards the rear of the book there are three letters thanking him for his assistance in the rescue of six men from Calf Rock Lighthouse in 1881.

These books don't have a high survival rate and it is a scarce commodity in itself. It will require thorough transciption and research by the new owner.

Captain Gravener's sword has the regulation 1827 pattern hilt, Queens Crown over fouled anchor to the guard, a particualry handsome lions head pommel. The copper twistwire bound rayskin grip of patent solid hilt type, complete with its original knot. The folding guard is present and functioning correctly, with no slackness.

The single edged "flat" blade of 28.5 inches in length, 1.25 inches in width at the ricasso, culminatiing in a spear point.

Proof mark and retailers mark for "Seagrove, The Hard, Portsea" to either ricasso. E.A. Seagrove, Outfitter, operated from premises at 22/23 Common Hard Portsea" between 1872 and 1891. They are known to have procurred thier blades from Messrs Wilkinson, of Pall Mall, London.

The blade also marked "Patent Solid Hilt" in a banner, along with the more standard etched decoration, including Queens crown over a fouled anchor, foliage, and the royal arms.

The blade with some area's of dark staining and old stabilised salt corrosion in places, the remaining areas are bright. Generally a good example of this most uncommon variation.

Regulation leather scabbard with brass fittings, bearing the cartouche for "EA Seagrove, The Hard, Portsea."  The seam to the scabbard has come apart due to loss of stitching. The scabbard quite "floppy" and in need of a feed and colour to bring it back display condition, but holding firm. Twin suspension rings.