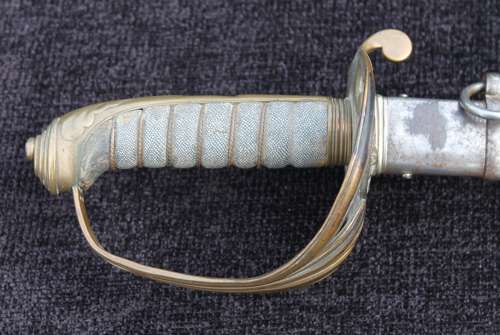 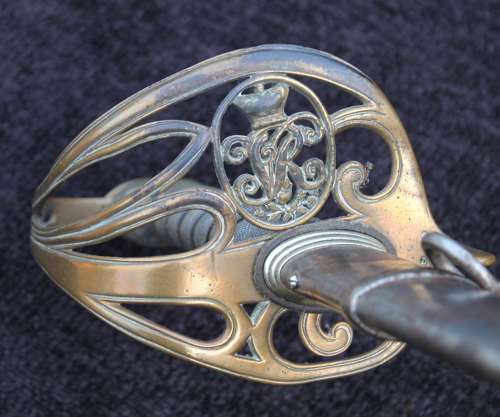 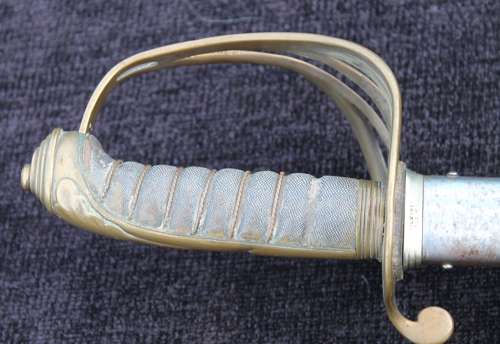 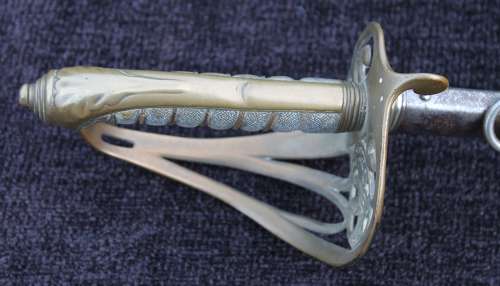 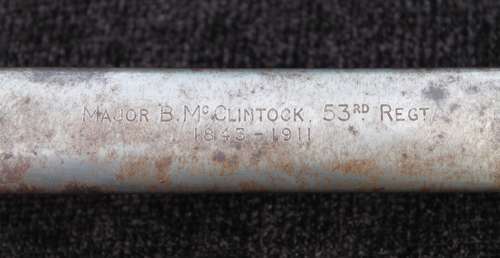 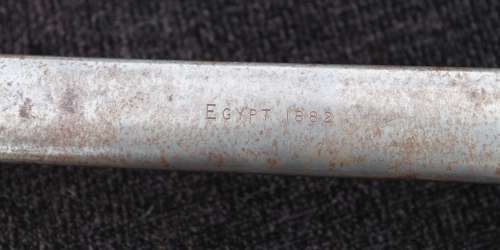 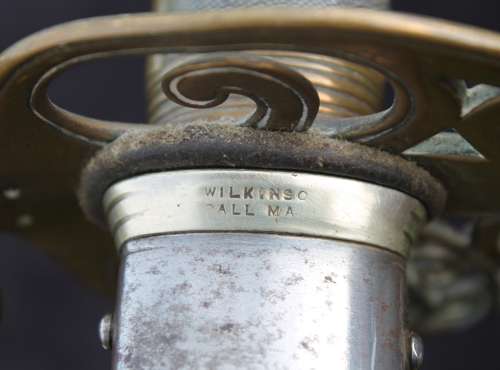 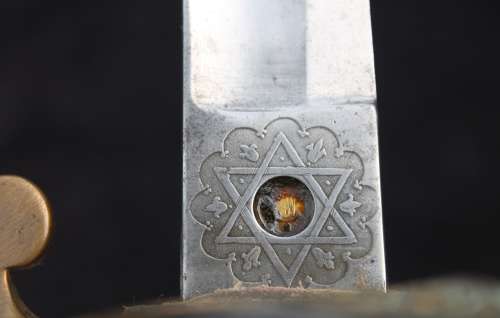 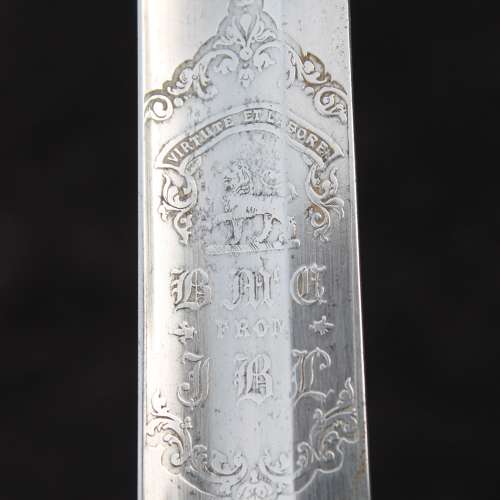 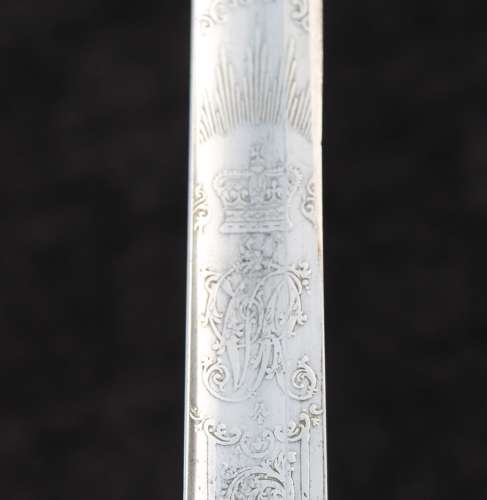 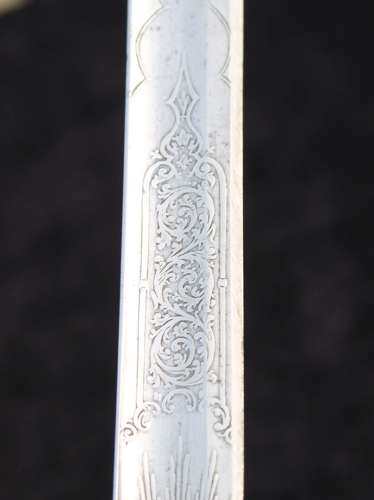 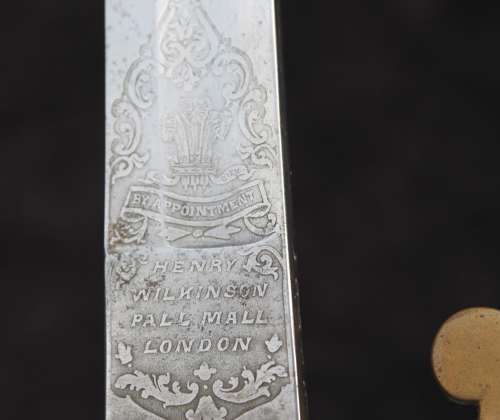 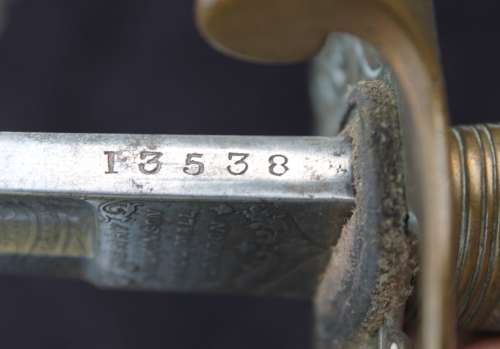 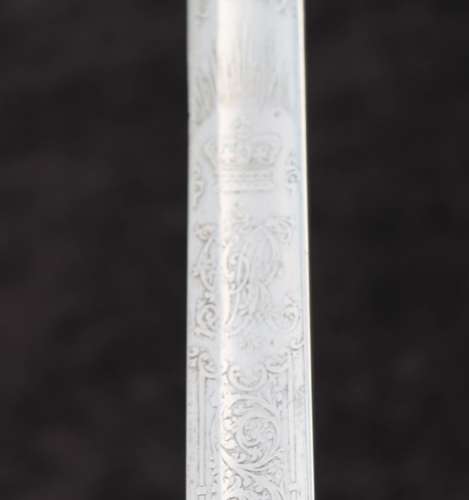 The sword of Major Benjamin McClintock (27th August 1843 to 8th July 1911) who served with the 1st Battalion 53rd Regiment, which later became The Shropshire Light Infantry.

He served with the 1st Battalion during the Egyptian War of 1882, being present at the Defence of Alexandria, and the surrender of Kafr Dowar and Damietta. He was awarded the Egypt medal and the Khedives Star.

He was the son of Robert McClintock (1804-1859) of Dunmore House, a Justice of the Peace for Donegal and Londonderry, and later Deputy Lieutenant and High Sheriff for County Donegal.

His nephew, Robert Lyle McClintock (1776-1943) was a Royal Engineer, and credited with inventing the Bangalore Torpedo.

The sword is by Wilkinson of Pall Mall, London, and carries the proof number 13538. The regulation 1845 pattern 32.5 inch blade is in very good condition, being bright and clear with crisp etching, with very few light areas of spotting. It is etched with the makers details at the ricasso, with an etched panel above the proof slug which displays the McClintock family motto "Virtute Et Labore" above the family crest. Beneath this are the initials "BMC From JBL"

The blade is also decorated with the  crowned royal VR cypher, as well as foliage and decorative swags. The blade has been service sharpened, as one might expect of an officer who went to war.

The brass 1822 pattern hilt is of the solid variety, and in good condition, with only minor light abrasions, and not deformed in any way. The shagreen grip is 95%+ complete and correctly bound by its original twistwire, although some strands are now  absent.

The hilt is firm in the blade and free from movement.

Housed in its original steel scabbard with twin suspension rings. The throat is marked for Wilkinson.  The scabbard could use a gentle clean and polish, but is free from any major dents. Unusually, the sword scabbard has been later engraved "Major B. McClintock 53rd Regt 1843-1911" and on the other side of the scabbard "Egypt 1882". I have encountered this type of engraving once before, where swords were on display in an old country house.

Included is a digital copy of the Wilkinson sword ledger page for this sword, which shows the sword was mounted in Novemeber 1864. Unfortunately there is a smudge in the middle of the purchasers name. It seems likely from what I can make out however, that it was ordered via a retailer.

An excellent example of a presentation fighting sword which saw active service. With the added bonus of further researching McClintock's career, and uncovering who presented him with the sword, and why.