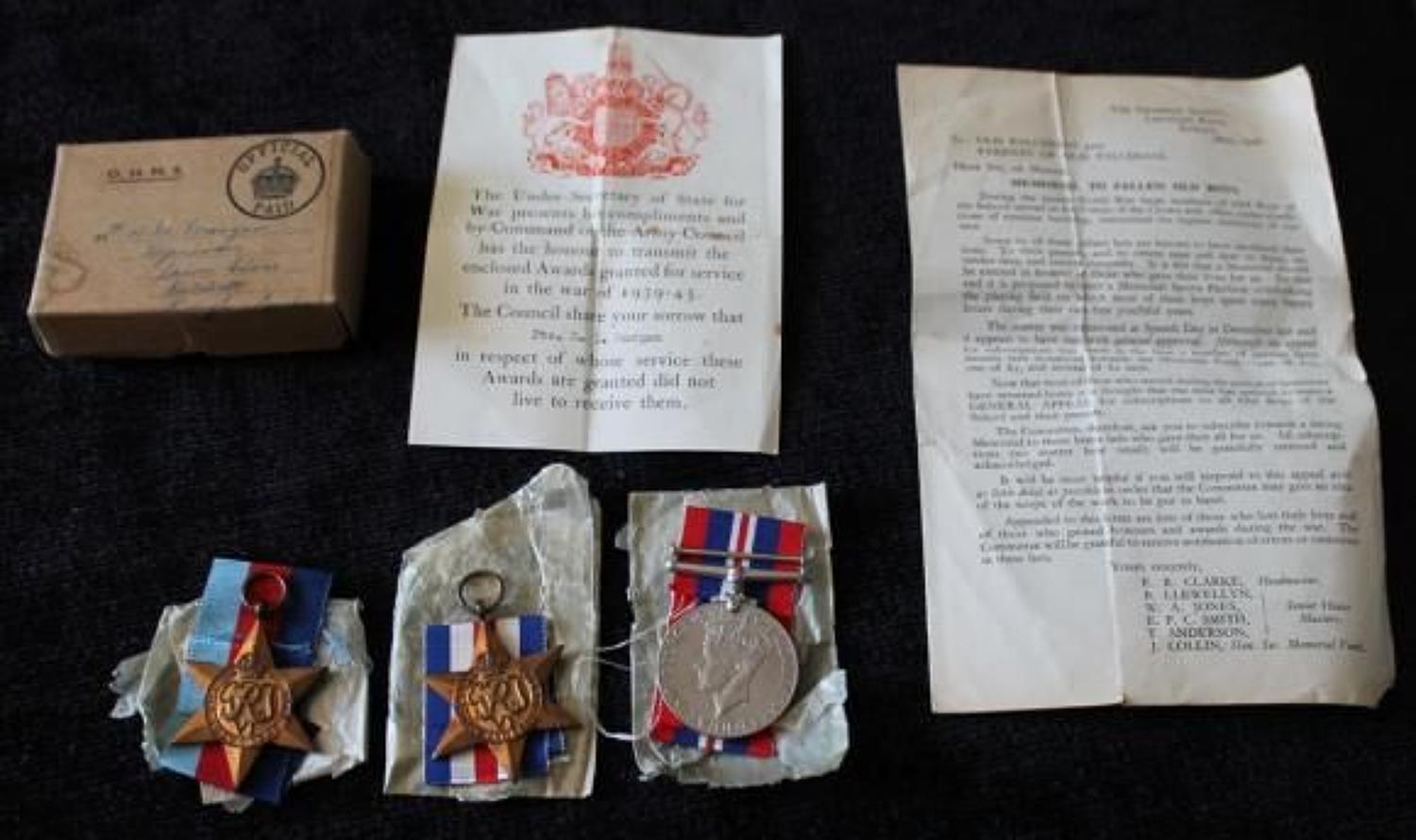 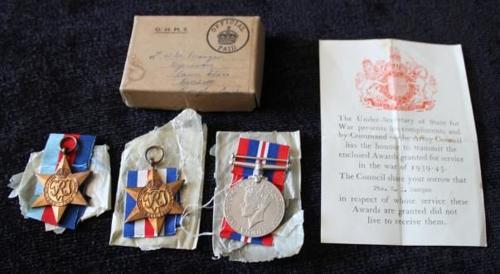 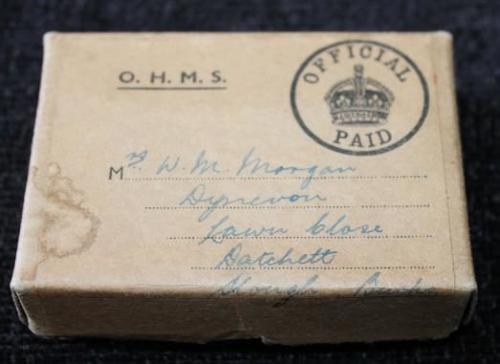 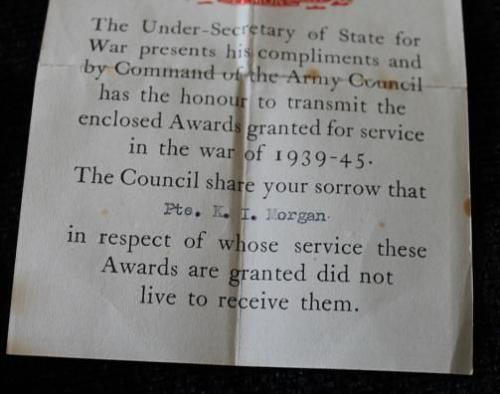 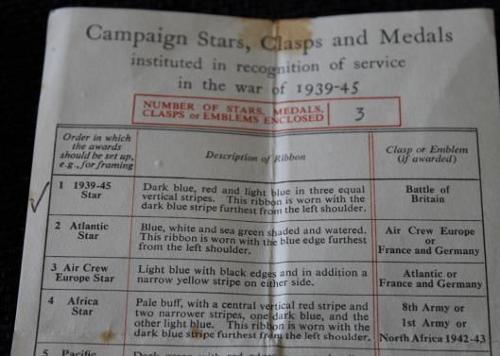 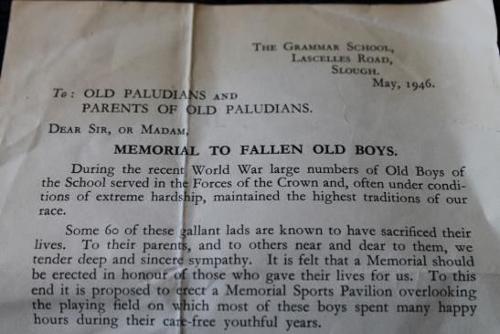 14670686 Private Kenneth Ivor Morgan was killed in action on the 2nd of April, 1945, and is buried in the Reichswald Forest War cemetery.

Below is a brief summary of the 3rd Battalion, in the weeks leading up to Kenneth's death.

On September 9th, the 11th Armoured Division was switched south to give flank protection for the Guards Armoured Division. It moved through Louvain and crossed the canal at Beringen. After crossing the division advanced through Helchteren, Peer, Bree, and cleaned the area between the Albert channel and the Maas up to September 12th. The division was then given a week’s rest in the Peer area. While resting the division was transferred to VIII Corps on the 16th and two days later the division was again on the move to secure the right flank of XXX Corps during Operation Market-Garden as far as the Maas. The division advanced in two columns. The division contacted the 101st US Airborne Division at Neuen, forced a crossing of the Willemsvaart Canal on the night of the 21st, and crossed the on the 22nd. The 11th Armoured then circled around Helmond, forcing the Germans to withdraw. At Deurne on the 24th, in a brisk action, the 3rd Monmouths killed twenty Germans and took forty prisoners for the loss of one man killed. On 25th September, the battalion had just occupied St. Anthonis near Oploo when Lieutenant-Colonel Orr was killed, together with the Commanding Officer of the 3rd Royal Tank Regiment. After the Maas was reached, the division recovered at Helmond from October 1st to 9th, 1944. During the rest of October and and November the division helped clear any German pockets west of the Maas. The operation began with the 159th Brigade crossing of the Deurne Canal on October 17th. The brigade took Amerika on November 22nd. One of the last pockets was a Brockhuizen, north of Venlo. The battalion attacked the village and the nearby ‘Kastell’, an old fort surrounded by a moat on November 30th with ‘A’ attacking the castle and ‘C’ the village. After crossing several hundred yards of open fields covered by enemy fire from the well-entrenched Germans, the companies lost both company commanders along with most of the other officers, senior NCOs and many men. The CO, Lt.-Col. Stockley, while rallying the troops to attack the ‘Kastell’, was killed leading his troops over the moat. ‘D’ Company then joined the battle with the tanks of the 15th/19th Hussars and cleared the village. Finally the remnants of ‘A’ Company with tank support took the ‘Kasteel’. Of the three hundred men of the battaion who fought, one hundred and forty were casualties. On December 5th, the western bank of the Maas was cleared and the division settled down along the Maas for the winter.

The division moved to the Helmond-Deurne area at the start of December to rest, refit and re-equip. Around the 14th, the tank regiments were sent to the Ypres area to gather new Comet tanks. The 159th Brigade’s infantry took turns on the Maas line during this period. The 159th Brigade left the Maas on February 17th, 1945 and moved to Turnhout in Belgium. On the 23rd, it moved to the Cleve area to take part in the fourth phase of Operation Blockbuster, the clearing of enemy between the Mass and the Rhine. The division arrived on the 24th, with the 4th Armoured Brigade temporarily replacing the re-equipping 29th Armoured Brigade, was to break through the Hochwald (Schlieffen) Line to capture the high ground north of Sonsbeck. The battalion advanced on February 27th, skirting the Hochwaldberg and suffering heavily from artillery fire, but pushed on and on March 2nd formed a bridgehead over the anti-tank ditch, which was the main defence of the Schlieffen line. Here some heavy fighting took place, which left ‘A’ and ‘C’ companies so much understrength that they had to be amalgamated. On March 5th, the 3rd Monmouths moved out of the Schlieffen line toward Sonsbeck and Xanten, but the division was halted as other formations converged on Sonsbeck. The division was withdrawn to concentrate near Louvain in Belgium on March 9th to rest and refit.

The division left Belgium on March 28th, crossed the Rhine at Wesel, and moved to a concentration area northeast of Wesel. From there, the 11th Armoured advanced to Gescher by the evening of the 30th. On the night of March 31st/April 1st, the 159th established a bridgehead over the Dortmund-Ems Canal facing the Germans positions on the high ground of Teutoburger Wald, a wooded range of hills to the east. The 3rd Monmouth’s task was to clear a two-mile area of thickly wooded steep hills to open the Ibbenburen road against a battalion of German officer cadets from a training school in Hanover. Battalion HQ was established at the bottom of the hills only five hundred yards from a bridge over the Dortmund-Ems Canal. The four rifle companies advanced at dawn on April 2nd along a track in the woods. The first objective was taken, but a heavy counterattack drove it back with heavy casualties. The next morning another German attack hit the Battalion HQ and Support Company on three sides. By throwing in cooks and mechanics, the group stood its ground until relieved by tanks. After relieve by the Dorsets, it was found that the battalion’s losses were the heaviest it had ever suffered in the campaign and included a Victoria Cross wond by Corporal E.T. Bates. It finally took a full brigade to take the battalion’s objectives. Due to the losses in this battle, the battalion had to leave the 159th Brigade and was left behind as the division advanced into Germany.

Group consisting of a 1939-45 Star, a France and Germany Star, and a 1939-45 War Medal. These are boxed, with their original cellophane packets. The box is named to Kenneth's mother, who lived in Datchett, Bucks. The group is complete with its original transmission slip, named to the casualty. These are accompanied by a a leaflet commemorating "Old Paludians" of the Grammar School, Slough. This is dated May 1946 and features a list of the old boys who fell during WW2, featuring Private Morgan.